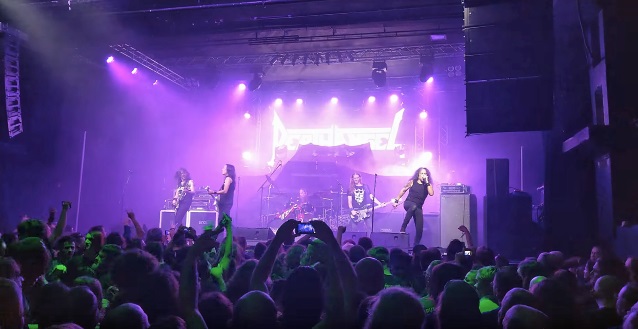 San Francisco Bay Area thrashers DEATH ANGEL paid tribute to Malcolm Young by playing a cover version of the AC/DC classic "Dog Eat Dog" during their November 18 concert at Barba Negra in Budapest, Hungary. Fan-filmed video footage of the performance can be seen below,

DEATH ANGEL guitarist Rob Cavestany told Guitar World magazine last year that AC/DC's "Let There Be Rock" was the first record he ever bought with his own money. "I remember looking at all the album covers in the bin," he said. "You're not supposed to judge a book — or record — by its cover, but as a kid, I saw the green people in the audience and Angus [Young], and I was like, 'Dude this must be sick!' And yes, that album delivered when I put it on my record player. That raw guitar tone was insane."

DEATH ANGEL singer Mark Osegueda told Metal Obsession in a 2010 interview that "the album that changed our lives from when we were kids was AC/DC's album 'Let There Be Rock', and we've always been obsessed with that; that made us like cheese to a mouse of getting to Australia."

DEATH ANGEL is currently on the road in Europe with TESTAMENT and ANNIHILATOR.

DEATH ANGEL is continuing to tour in support of its latest album, "The Evil Divide", which entered The Billboard 200 chart at position No. 98 with first-week sales of just over 6,000 units — nearly all from pure album sales. The set followed the No. 72-peaking "The Dream Calls For Blood", which opened with around 5,400 copies back in 2013. 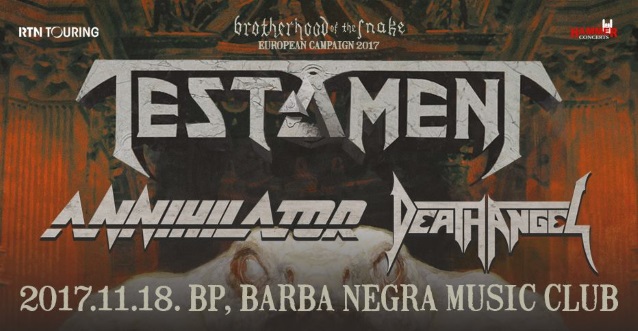