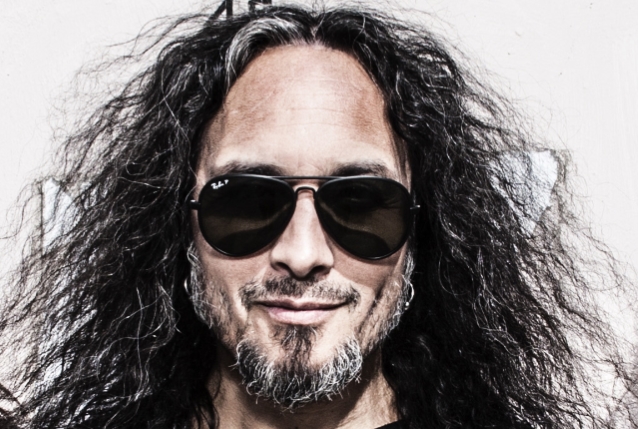 In a recent interview with the "Nothing Shocking" podcast, DEATH ANGEL singer Mark Osegueda was asked if he feels slighted by the fact that his band rarely gets mentioned alongside the so-called "Big Four" of 1980s thrash metal — METALLICA, MEGADETH, SLAYER and ANTHRAX.

He continued: "I don't feel slighted — I don't. The 'Big Four' will always be the 'Big Four,' but I do think that we definitely still have to fight extra hard for respect. We've earned a lot of respect from journalists and fans that, at one point, kind of overlooked us. And I think 'cause of our persistence, and, I guess, the aggressiveness of our material that has grown a great deal that I think we won a lot of people over that used to kind of scoff at us."

A few years ago, TESTAMENT singer Chuck Billy told Metal Insider that METALLICA, MEGADETH, SLAYER and ANTHRAX were rightfully called the "Big Four" because "those four bands had great success selling millions of records. But the rest of us — EXODUS, DEATH ANGEL [and] TESTAMENT — we didn't sell out those festivals or that amount of records. So I don't see us being compared to that. I'd say if metal was still going as strong as it was, yeah, we all stood a chance to sell a lot of records. That's just my take on it. When people talk about that, to me, those four bands are justifiable, and that's it. I don't see any other bands that were the 'Big' whatever."

Last year, OVERKILL vocalist Bobby "Blitz" Ellsworth said that "when it comes to being selected and not selected" for inclusion in the "Big Four", "that's a simple accounting issue. When you talk numbers, numbers make the world go around, numbers put food on your table, and numbers put the 'Big Four' in arenas. And they sell enough records to do that… He who sells the most gets the pole positions."

METALLICA guitarist Kirk Hammett concurred, telling U.K.'s Metal Hammer magazine in a 2014 interview that "EXODUS in the '80s had some bona-fide problems, but I think their first album [1985's 'Bonded By Blood'] is just as good as [METALLICA's debut] 'Kill 'Em All'. We were just playing the music we wanted to hear because no one else was playing it and it wasn't being played on the radio. It was only a small group of people who knew about it and it was almost elitist in that 'No posers allowed!' thing."