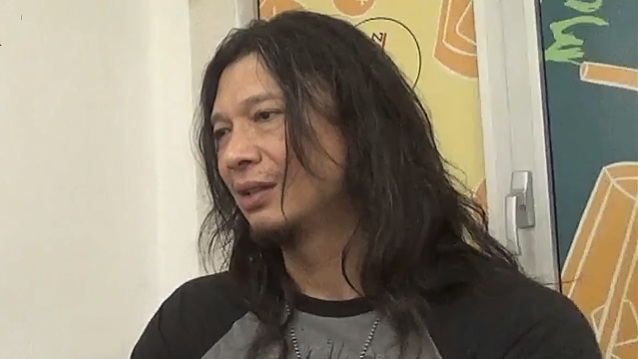 Impact metal channel conducted an interview with guitarist Rob Cavestany of San Francisco Bay Area thrashers DEATH ANGEL prior to the band's November 18 concert at Barba Negra Music Club in Budapest, Hungary with TESTAMENT and ANNIHILATOR. You can watch the entire chat below. A few excerpts follow (transcribed by BLABBERMOUTH.NET).

On his relationship with fellow guitarist Ted Aguilar, who joined DEATH ANGEL in 2001:

Rob: "We just love music. Our lives are based around music and even our friendship is based around music and equipment and gear and everything. We're constantly, if we're not dealing with actual music itself, we're dealing with something that has to do with music, like setting up our tours, preparing, constantly about something to do with music. Because of that, and because of how much we're into it, I think we naturally inspire each other just by doing the things we do on a daily basis and playing and listening to music and going to concerts. The normal way for all people who love music and musicians are inspired by."

On the evolution of thrash metal and whether he follows newer thrash bands:

Rob: "To be honest, I don't follow the newer bands. I hear of them, I try to check out as much as I can just to see what's going on and see what people are doing. I think there's a lot of great, new music coming out these days, but I'm just an old-school kind of guy. When I listen to music, I just listen to the stuff that I love, the artists that inspired me when I was, to me, the 'gods' of music and then here and there, I check out other music, I'll have a listen. But, it's hard for me to be inspired by music that's already inspired by music that's already inspired by something I'm already listening to before. If that makes any sense. When I hear new thrash, it's just like, I'm not trying to say anything negative against it, immediately, my mind is picking out: 'I hear this band here. It sounds like this part. It reminds me of that. This reminds me of that.' I'm not saying it negatively; I can't help it. My ears are hearing those sounds in there. So, I end up analyzing it that way. I think they do a good job, but I'd rather listen to the source than that. I wouldn't be surprised if the bands who I admire don't listen to DEATH ANGEL to get inspired. They probably listen to even older music and other things and what they grew up on and the stuff you just love and that really inspires you."

On whether DEATH ANGEL is working on the follow-up to 2016's "The Evil Divide":

Rob: "[Laughs] Every time this question comes, I feel the pressure. We will be soon. I've got little ideas here and there and I have my notes for concepts and little stuff, but I fully, fully jumped into the full-on…once I turn my mind into the creative process and writing, then like, it usually comes in big waves of stuff all at once. I'll start listening to those little ideas and start listening to that, like, 'Okay, that's a cool idea. I'll start putting it together.' But, right now, we're still in a touring phase. I just want to enjoy the live aspect and the touring and where we are. Otherwise, I'm going to always be locked in the back of the bus or in the dressing room, working on music, which I've done before when I've had to write on the road, but I don't really feel like writing on the road. I want to experience the things. When that happens, you miss everything. You just sleep and you go [and write] and you're in the back and play the show. You're isolated all the time. So, what I'm doing is gathering inspiration. A lot of times these days, mainly the things for inspiration for creativity and writing music is not necessarily coming from music itself. It's more so coming from experiences of life and then what you experience and the emotions and the different things from the people you meet and the places you see, then that's turning into music inspiration."

DEATH ANGEL is continuing to tour in support of "The Evil Divide", which entered The Billboard 200 chart at position No. 98 with first-week sales of just over 6,000 units — nearly all from pure album sales. The set followed the No. 72-peaking "The Dream Calls For Blood", which opened with around 5,400 copies back in 2013.