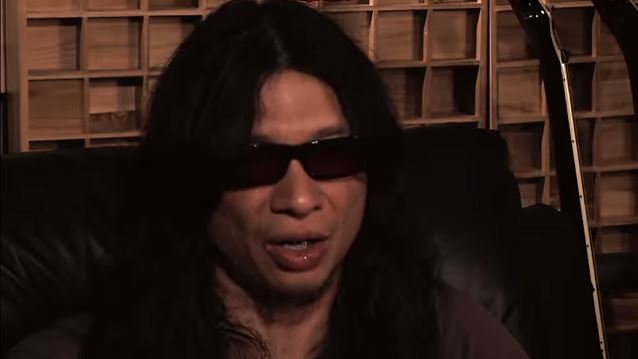 Italy's "Heavy Demons" radio show recently conducted an interview with guitarist Rob Cavestany of San Francisco Bay Area metallers DEATH ANGEL. You can now listen to the chat in the YouTube clip below. A couple of excerpts follow (transcribed by BLABBERMOUTH.NET).

On what fans can expect on DEATH ANGEL's next album, tentatively due in April 2016:

"[They can expect] as much of a DEATH ANGEL album as you might think. But other than that, I can't really explain it, because the way we approach writing and creating, we just kind of let it happen… whatever we're writing at the time. So one song could be one way, and one song could be another. But, overall, it's just the same thing: whatever we've written so far has got all the elements. It's fucking heavy — very, very heavy; some parts are brutal and totally fast and brutal. Some parts are, like, more grooving and, like, more fucking… just, like, solid fucking beat, like, fucking pumping kind of sound… And everything in between — melodic and fucking ripping your face off. It all sounds urgent, because it's always coming from an urgent place, one way or the other."

On the differences between American and European audiences:

"In general, overall, just kind of… I'm not saying this about every single American and every single European, but it's just… in general, generally speaking, the masses of the crowd are more receptive to our music in Europe, and they just seem to be more receptive to music in general, as far as paying attention and taking the music so seriously. Even, you can tell by the way we're treated at the venues when we play. Overall, all the people working — the staff, everyone involved in doing the show and stuff — is into it; they're proud of what they do and they're happy about being part of the whole thing, and everything, and then the fans appreciate it. And a lot of times, somehow… in the States, some people aren't caring that much about it; they seem like they're just, 'Whatever,' they're not really paying that much attention. Shit's not flowing as smoothly, and people aren't… And then the crowd sometimes… same kind of vibe: people aren't just totally getting absorbed into the music and the show. But it's just… You know… I don't know… It's an American thing, in certain ways. There's aspects of America that I don't like, and that kind of goes along with the overall vibe. Which isn't to say that we don't have great shows in America, and especially some of the majot cities; it's a whole another world when you're playing in New York, San Francisco, Chicago… It's insane. It's great. It's one of my favorite things to play; I love playing in those places. Then you have these other places [where] it's just kind of… I don't know… There's places… You know… Just happens… And in Europe, of course, there's places too. There's also people that… It's not like every single person is the greatest guy in the world. But the collective vibe [in Europe] I just really like. And it's not just me; [it's also] my whole band and a lot of other musicians that play out here."

DEATH ANGEL vocalist Mark Osegueda recently told Conny Schiffbauer of Rock Hard magazine about the musical direction of the band's forthcoming follow-up to 2013's "The Dream Calls For Blood" album: "We actually had a plan, to a certain degree. When we started working with [producer] Jason Suecof for the last two records, [2010's] 'Relentless Retribution' and 'The Dream Calls For Blood', we thought we were gonna do two records intense like that and kind of go back [to the more] melodic [direction of 1990's] 'Act III', but the last two records, we've been loving so much writing that style, and the crowds have been enjoying them so much. And I think we're gonna kind of stick with the same brutality and technicality and, yeah, kind of keep writing this route. 'Cause one thing… In our minds, even if we think we're being more brutal than we've ever been, it's inevitable that we are obsessed with melody, so there's always gonna be melody that separates us from, say, different thrash bands or extreme bands, because we always veer to a melody and catchy hooks. No matter how brutal we think we're being, we like to throw in hooks, so we're just gonna carry on how we're doing now and try to pick as many of the young punters there and keep our stronghold on the old punters."