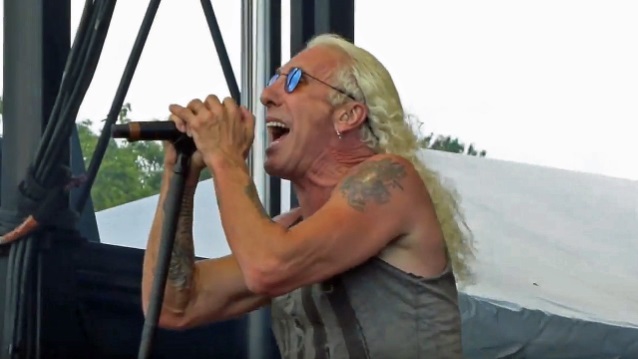 Dee Snider says that he can no longer be friends with Donald Trump because he does not share the 45th U.S. president's views on important issues.

Speaking to Bolivia's ATB, Snider said (see video below): "I was on Donald Trump's 'Celebrity Apprentice' [reality TV show] for three years. I came to know him and his family socially. But it wasn't until he ran for president that I discovered his belief system inside, and I disagree with what he believes — I absolutely disagree with what he believes. So it's very difficult because we were friends before, but now that he speaks his true mind, I can't be friends."

Snider singled out the Trump administration's harsh immigration policy as an issue on which he does not see eye to eye with his former friend.

"The United States is a country of immigrants — everybody there, except Native Americans, everybody is an immigrant," Snider said. "My family is [a family of] immigrants. We've always welcomed immigrants, and we should continue to welcome immigrants. So, a wall? Crazy. To say no to immigration? Crazy. This has made our country strong. All these people from all over the world have made the United States one of the strongest countries in the world. We can't stop bringing people in now."

Trump recently announced that he will rescind Deferred Action for Childhood Arrivals (DACA),which offers protections to undocumented immigrants who arrived in the country as children. The program was started as an executive order by President Obama. Trump has also called for a complete ban on all Muslims entering the United States and has long sought to tighten the borders.

Snider found himself in the middle of controversy last year when he asked Trump to stop using the 1984 TWISTED SISTER anthem "We're Not Gonna Take It" in his campaign. The singer said at the time that Trump was very gracious about the request.

While many rock artists have been against Trump, musicians like STAIND's Aaron Lewis, Kid Rock, Ted Nugent and FIVE FINGER DEATH PUNCH's Zoltan Bathory have voiced their support the real estate magnate, who had no governing experience prior to being elected president.