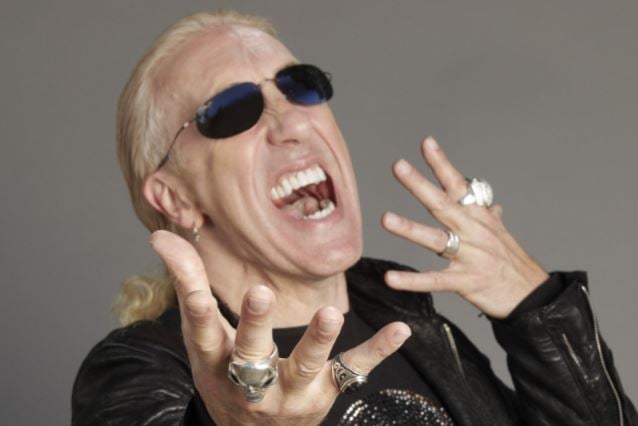 DEE SNIDER Shares His Secret To A Successful Marriage

In a business not known for fostering healthy and stable relationships, TWISTED SISTER singer Dee Snider and his wife, Suzette, have made their marriage work for more than three and a half decades, even as Dee traveled the world as the frontman for one of the most successful bands of the glam-metal era. How have they survived the ups and downs and kept things fresh decades into their union?

"I get asked this a lot," Dee said during an interview with veteran radio personality Jenn Marino, who in 2014 joined MÖTLEY CRÜE and SIXX:A.M. bassist Nikki Sixx as co-host of "Sixx Sense With Nikki Sixx". "Suzette and I have been married 36 years, I've been with her 40, living together 39. She is, you know, 'through thick and thin.' And I could say some funny things, I could say some truthful things, like 'Just say yes,' which every married dude you'll ever see… 'Happy wife, happy life,' and all that stuff like that. Or I can tell you pithy things and stuff like that."

He continued: "One thing I can say… When we went to therapy — and we've been to therapy; I nearly blew it a few times — the therapist said, 'The only difference between couples who get divorced and the couples who stay together [is] the couples that stay together refuse to accept divorce as an option.' That's the only difference. It's not the problems they have; everybody goes through the same stuff or does the same mistakes or stumbles or falls, but the couple that stays says, 'We're not getting divorced, so let's figure this out.' So there's that, and that plays a really big part. And the other part is just knowing it's a work in progress. And if you think it's just you said it and forget it — no. Life is constantly changing, things happen…"

Snider added: "Look, falls from grace… Success? My success, which nearly destroyed us, because I became so full of myself, I didn't wanna hear anybody tell me 'no,' and Suzette is not a 'yes' girl. She's a tough Brooklyn chick; she's never been a 'yes' girl. And at some point, I didn't wanna hear anybody saying anything to me but 'yes.' So I nearly destroyed it then. But we made it through. I got knocked down, and we kept it together. At one point in her life, her brother was murdered, and let me tell you, that was devastating in her life, and that was one of those points where you sit there and go, 'Well, for better or for worse… And I've gotta hang on through this,' because you don't just walk away when things get a little crazy and a little tough, because a depression and a half set in after that. So it's a work in progress."

During an appearance on the Oprah Winfrey Network, Suzette gave her opinion about why her relationship with Dee has lasted this long. She said: "I believe the key to a successful marriage, or relationship in general, is to always view it as the first or second or third date, when things were exciting and new and you literally fantasized about meeting, seeing each other, the butterflies in your stomach. I think that's the way you keep it alive. And I always fantasize if I was his mistress or girlfriend, what would I do? What would I have done [36] years ago?"

Snider's solo album, "We Are The Ones", was released on October 28 via Red River Records (distributed by BFD/RED). Produced by Damon Ranger, the record is described by Dee as "an album that is think part FOO FIGHTERS, part IMAGINE DRAGONS, part THIRTY SECONDS TO MARS." He added: "Forget anything from the past. Most of my heavy metal fans are gonna hate it; I've abandoned my past to move forward."