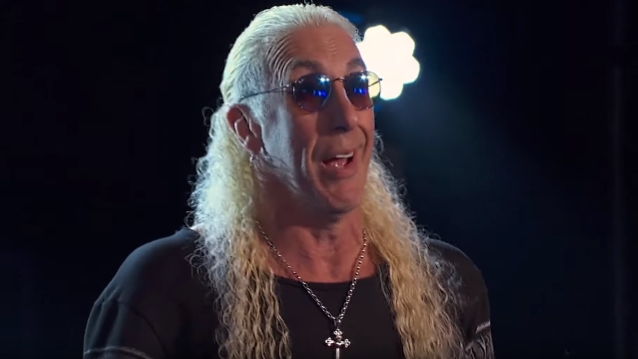 DEE SNIDER's Advice To New Bands: 'Finding Your Own Sound Is Never By Design'

As part of this week's Top 10 "Rules Of Rock" from Topgolf, TWISTED SISTER frontman Dee Snider was asked what advice he has for new bands trying to find their own sound. He responded (see video below): "Finding your own sound is never by design. No one in the history of recorded music has said, 'I'm gonna create something new.' No. They all were trying to be somebody else. David Bowie wanted to be the next BEATLES. BLACK SABBATH was a jazz fusion band. What went wrong there? Alice Cooper wanted to be THE DOORS. Nope — you're not. And along the way, they weren't that, but they became something else. So if you're sitting there trying to figure out how you're gonna be fresh, new, different, stop trying. Just make music, and if you're gonna be different, it's gonna just happen."

The show's second season premiered on March 28 on Topgolf's digital channel (available on streaming platforms like Amazon Fire and Roku) and features 12 bands vying for a $50,000 prize. The winner will also have a chance to be featured on a concert tour of Topgolf's 57 venues across the country and sign a label development deal with BMG.

"Music is at the heart of our brand, and 'Who Will Rock You?' is the next expression of an authentic Topgolf experience," said Topgolf media president YuChiang Cheng. "Not only can our fans come to Topgolf to hear great music, but now they can discover new artists through 'Who Will Rock You?'"

Topgolf stepped into the music industry with two popular concert venues — The Toyota Yard at Topgolf Las Vegas and The Cowan at Topgolf Nashville. Both venues host dozens of national and local artists each year and accommodate up to 900 and 600 guests, respectively. Filmed at both The Cowan and The Toyota Yard, "Who Will Rock You?" highlights the brand's unique concert venues.

"Topgolf and live music are a natural fit. When you combine our massive fan base with our nearly 40 U.S. venues, Topgolf is uniquely positioned to serve the artist community while providing our guests with an exciting, new entertainment experience both in-venue and online," Cheng said.