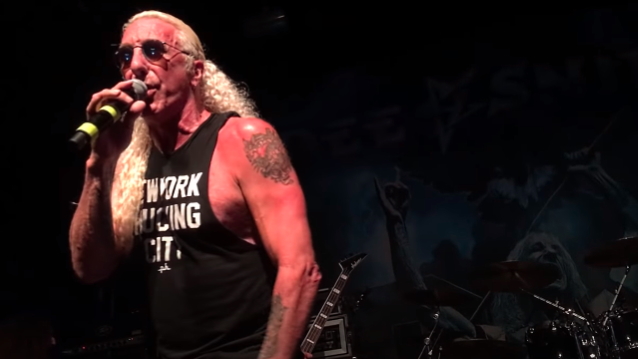 The TWISTED SISTER frontman discussed the upcoming release during a brand new interview with "The Five Count" radio show. Asked what projects he has coming up while he, like the rest of the world, is waiting out the coronavirus pandemic, he said (hear audio below): "I was supposed to be directing my first feature film, a movie I wrote called 'My Enemy's Enemy', but all film productions have gone on hiatus right now, and TV productions — everything's at a standstill. I'm writing my first fictional novel — I'm just about finished with that. That I'm back to working on, and I'm gonna finish that up. And I actually have a live concert video and album coming out this summer, which may be timely since all the live shows are being canceled. So people can pretend they're at the concert in their living room and rock out to Dee Snider from my world tour last year."

In a separate interview with Distorted Sound, Snider said that he has found his place in the contemporary music scene with "For The Love Of Metal". "I'm so happy to be doing this," he said. "This record defines me as a person who wants to feel vital what I'm doing now matters and counts. I'm so happy I thought there wasn't that place in music for me. I've been doing Broadway, radio, TV, movies, I've been finding my place now with other things that I've been doing, but my first love is metal and music, and to do a record that I feel is a place now… My wife said she hasn't seen me this happy in a long time, and I'm always happy. She said I have an odd, childlike glee. It's crazy. I know, I'm [65] and not that I feel it. I'm healthy, people see me rock and their minds are blowing. I didn't think at this point in my life, this would be happening."