DEEP PURPLE's Ian Paice and Roger Glover will read the citation for METALLICA (pictured) when the San Francisco heavy metal giants are honored with the prestigious Polar Music Prize next month.

The ceremony traditionally features Swedish artists performing the Laureates' music, and this year, members of GHOST and CANDLEMASS will play a METALLICA song at the event, which will take place on June 14 at Konserthuset in Stockholm. Also scheduled to appear are REFUSED frontman Dennis Lyxzén and SCORPIONS/ex-MOTÖRHEAD drummer Mikkey Dee, who will perform a piece of music written specifically for the occasion.

The evening banquet will be held at the Grand Hotel immediately following the ceremony at Konserthuset.

The entire event will be broadcast live on Sweden's TV4.

Sweden's biggest music award, the Polar Music Prize was founded in 1989 by Stig "Stikkan" Anderson, the manager and music publisher of ABBA. A well-known lyricist, he also was the co-writer on many of their early hits. The prize was first presented in 1992.

When METALLICA was announced as the recipient of this year's Polar Music Prize in February, Ulrich said in a statement: "Receiving the Polar Music Prize is an incredible thing. It puts us in very distinguished company. It's a great validation of everything that METALLICA has done over the last 35 years. At the same time, we feel like we're in our prime with a lot of good years ahead of us. Thank you very much."

METALLICA frontman James Hetfield added: "I feel very honored to be in such great company with the others who have accepted the Polar Music Prize. As myself and as METALLICA, I'm grateful to have this as part of our legacy, our history. Thank you."

Trujillo said: "Receiving the Polar Music Prize is such an honor, especially sharing it with [previous laureates] such as Joni Mitchell, Keith Jarrett and Wayne Shorter, who I admire dearly… Hopefully this will inspire younger generations of musicians to keep the music alive."

METALLICA guitarist Kirk Hammett stated: "It means a lot to me because we've been added to a list of very distinguished artists and musicians who I respect. And to be acknowledged for the work we've done. I know how important this is and how much of an honor it is."

The Polar Music Prize honors two laureates every year to "celebrate music in all its various forms" and "to break down musical boundaries by bringing together people from all the different worlds of music." It awards each laureate one million kronor (approximately $125,000).

METALLICA will donate the prize money to its All Within My Hands Foundation, which is dedicated to assisting and enriching the lives of the members of the communities by supporting workforce education, the fight against hunger, and other critical local services.

In a statement announcing METALLICA's award, the Polar Music Prize award committee said: "Not since Wagner's emotional turmoil and Tchaikovsky's cannons has anyone created music that is so physical and furious, and yet still so accessible. Through virtuoso ensemble playing and its use of extremely accelerated tempos, METALLICA has taken rock music to places it had never been before. In METALLICA's world, both a teenage bedroom and a concert hall can be transformed into a Valhalla. The strength of the band's uncompromising albums has helped millions of listeners to transform their sense of alienation into a superpower." 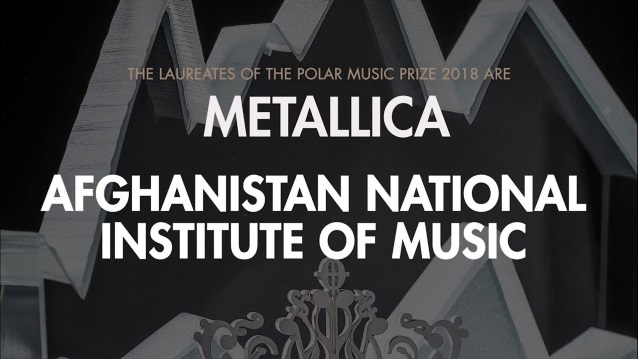