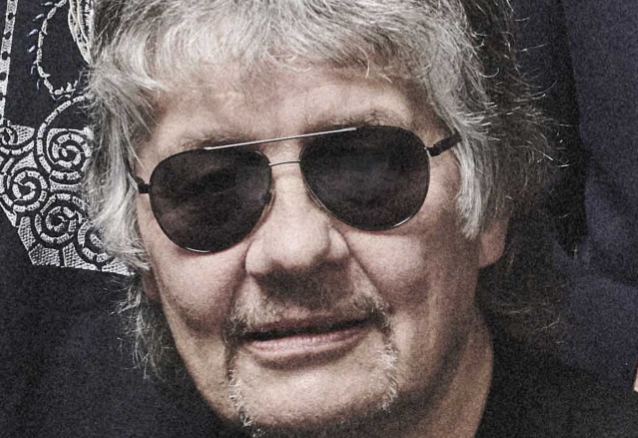 It was previously reported that Airey had laid down keyboards on the "Painkiller" songs "A Touch Of Evil" and "Living Bad Dreams", but he had never publicly discussed the fact that he also contributed bass tracks to the 1990 LP.

In an interview with AntiHero Magazine, Airey said of his keyboard contributions: "[JUDAS PRIEST] were so worried about it they didn't even give me a credit, I don't think, on the album. They paid me, which is always the point. It's a wonderful album, 'Painkiller'."

According to Airey, PRIEST drummer Scott Travis had "spilled the beans" about Don also playing bass on the record. "All the bass parts are me playing on the mini — it's Moog bass on the whole album; that was [PRIEST bassist] Ian Hill's bass mixed in as well on parts," Airey said.

He explained: "At the time, Ian wasn't very well, so he wasn't at the sessions. So I got made to do all the bass, and they kept it. I mean, it was a funny old job. I only got to play proper keyboards on one track, I can't remember what the track is. I just read about it yesterday, that they'd actually said [I played bass on it]. I've never said a word about it before. I mean, it was an exciting album to do. They're wonderful people to be around."

Airey's keyboard work can be heard on over three hundred albums, placing him among the most recorded players of all time. His first stint with a major rock act came in 1974 with COZY POWELL'S HAMMER, before joining Jon Hisemen and Gary Moore in the fusion outfit COLOSSEUM II. Don performed on the BLACK SABBATH album "Never Say Die" before teaming up once more with Cozy Powell, as well as Ritchie Blackmore and Roger Glover, in RAINBOW. The next four years were spent with Ozzy Osbourne. Don, after all, had created the keyboard intro to the seminal track "Mr. Crowley" on the "Blizzard Of Ozz" album and played all of the keyboard parts on the "Bark At The Moon" LP. During the 1980s, Don undertook session work for many artists, most notably on Gary Moore's "Out In The Fields" album and WHITESNAKE's multi-platinum selling 1987 effort. However, it was in 2001 that the opportunity to join DEEP PURPLE came along. Don stood in — at a day's notice — for Jon Lord ahead of DEEP PURPLE's summer tour. When Jon then announced his retirement, Don was delighted to join the band full time.