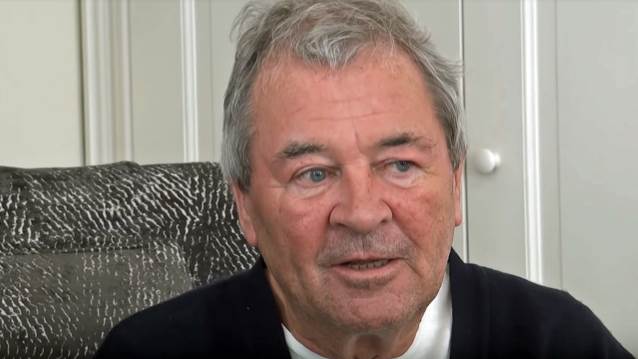 Kaaos TV conducted an interview with DEEP PURPLE singer Ian Gillan prior to the band's June 8 concert in Tallinn, Estonia. You can now watch the chat below. A couple of excerpts follow (transcribed by BLABBERMOUTH.NET).

On whether he feels DEEP PURPLE is on top of its game right now:

Gillan: "I never thought that we weren't. I'm writing a project called 'The Parallax Effect On Reality', and it basically depends on where you're standing. And a lot the questions that you ask me, and that a lot of people ask me, are really difficult to understand and difficult to answer. The reason is because we don't look at things that way. We stand in a different position; we think of our music and writing our music not from a commercial point of view, nor do we judge the music upon the reaction of the audience or the reaction of the critics. It would be ruinious for us to do that, and we wouldn't make progress. We learn from our own mistakes all the time, and I think if the band is happy, generally, the music is happy. When I say 'happy,' I don't mean jokey — what I mean is it's confident and full of expression, dynamics and texture. The big changes that happen in our lives will affect us all, and a sense of renewal happened when we got involved with Bob Ezrin, our new producer, for the previous record, [2013's] 'Now What?!' And he's made a big difference in terms of discipline. So, yes, from that respect, we're on top of the game, because, as you know, with anything that happens by committee, you don't really get the hard-driving result that you want. It may be perfectly good; sometimes it's a bit long-winded and sometimes it lacks personality, because everyone's settled for a compromise. And it happens from time to time, but you're not aware of it at the time — you're just doing your best at all times. And so the commercial judgment or reaction is something that you feel yourself anyway, 'cause you're all feeling the same thing. I say that because we resist objective judgment; it's essential to do that. You can't be influenced by… We never took requests, for example. It's something that has to come from within the band; the music has to evolve and come naturally. That's just to keep our sanity, because if we did what everyone wanted, we'd be in a mess, 'cause everyone doesn't want the same thing — everyone wants different things. So we'd be torn in this direction and that, and trying to please this section, or trying to be fashionable, which is something we've always avoided. And that's really important, because if you're fashionable today, then, by definition, you're unfashionable tomorrow. So it's important to be true to ourselves. It's hard sometimes, and it makes life difficult. Because you're hearing criticism: 'Oh, why didn't you do this?' When I was 17 or 18, I think, someone shouted out of the back of the hall, 'Get your hair cut.' Because I was doing my Elvis impersonations and THE BEATLES were just arriving with a different hairstyle. So I'm thinking, 'Should I did that?' And I did. And I thought, 'No. I'm gonna get my hair just natural, as I feel it.' And so the same applies to the music. And the same applies to everything — your approach in life, I think, really. So it's a long-winded answer to your question, but yes, I think we're on top of the game, and most of that is due to a catalyst, and that's Bob Ezrin."

On whether DEEP PURPLE still has any new music left in it before the band completes "The Long Goodbye Tour":

Gillan: "Do you stop breathing? Do you stop eating? Do you stop music? Is it something that there is suddenly no more of? It's not possible. We're musicians, we're writers, and everything we do… And if you want to call yourself an artist, it's incumbent upon you to be expressive, and you can't just stop being expressive. So whether that's professionally or privately, I think the thing to do with the confusion of 'The Long Goodbye' is it was intended to be a long, long, very long goodbye… People have preconceived ideas; they read words and they take everything… I mean, how can you take a 'long goodbye' literally? What does it mean? Does it mean 'goodbye' or does it mean 'long' goodbye? And I think the reason for that is a couple of years ago, everyone in the band was unwell, we all had health problems, which have been well documented, and I think somebody — and I can't remember who said it; probably somebody from the office — said, 'Do you guys wanna call it a day? Because you all have got health problems here.' And so… getting a decision from DEEP PURPLE is always very tricky. So I guess there were a few nods and 'hmmmm,' 'well,' 'yeah,' 'maybe,' 'I don't know,' so we [said], 'Let's call it 'The Long Goodbye',' and that way, we can make our decision later. Now, the fact is that everyone's feeling great now, and we've all got over those health problems and everyone's in good shape. So I think we're gonna be looking at writing some more material next year and maybe even possibly another album; I don't know. But this has turned into an incredibly intense tour; from now until next March, we're on the road non-stop, in Europe, in America, in Canada, in Japan, Mexico and so on. And then I've got solo tours in Eastern Europe, and then I've got a 'Rock Meets Classic' tour in Germany next February-March. So, yeah, it's pretty intense. So I think we shall be going on, but we'll take a breather, I think, around March or April next year. [I'll] go put my feet up somewhere for a couple of months."

On whether he has any plans to release new solo music:

Gillan: "I've got about five projects in mind. I've got about 30 songs in my library that have never been recorded. I don't know which of those will actually end up coming alive, but there is one, a project that we've just finished recording in Hamburg. I recorded a new album with my first-ever band, THE JAVELINS, from 1962, and we finished recording that material of the time. And that's coming out in August. And I'm gonna start promotion work on that in a few weeks' time. So you're the first to actually know about it. And it contains songs like Ray Charles and Buddy Holly and Howlin' Wolf and Chuck Berry and stuff like that, from that era. And the guys in the band, most of them tickled along at the occasional gig and they practiced, but most of them haven't really played in any progressive way for 50 years or more — 55, 56 years now. I prepared all the material with Steve Morris, my old partner from Liverpool — not Steve Morse; Steve Morris. And we sent the tapes, 16 songs, to each of the guys, and said, 'Okay, practice like crazy for six weeks.' And so we all met in the studio in Hamburg and we recorded 10 songs on the first day. And the whole 16 were recorded in two days, and then the solos and extra bits and pieces, a few mistakes, were repaired on a Wednesday, and then we did a video, and that was it. It was unbelievable. And I was listening to the rough mixes, before we put on the vocal backings, the girls, and the brass section, because a lot of those old songs, like THE COASTERS and Ray Charles, had brass sections on them, so we're doing it authentically, augmenting the band. But, you know, because they hadn't played professionally for 50 years, they didn't evolve at all — they kept playing in the style which was in 1962, and consequently, when I'm listening to it, I think, 'My God! This is so authentic. It sounds just exactly as it did in those days.' It's not musicians from today trying to do a retro version of those songs, which I've heard plenty of, and they're always high production — there's no breathing space; no nothing. It sounds, to me, just as I remember it. And so I'm very excited about that. Of course, we're all in our 70s, and we're like a bunch of school boys in the studio. We had a reunion a couple of years ago — at Christmas, we all went on a boat up the river Thames and had a fantastic night. And it was great — the old banter was still there, the jokes and the sense of humor. And it was wonderful — just truly wonderful. A great experience for these guys who have not been in a studio like that before. We did try another project a few years ago and made another set. So I think there were some nerves and some apprehension prior to the session, but by God, they went through it great. After every day's work, we sat down, we had a meal and drank some beers together and just talked about things. It was great. It was certainly a fantastic experience. And I think the spirit of the band… This is very important with DEEP PURPLE, which has had its ups and downs throughout the history of the band, with personalities and personnel and the difficulties there, there have been times where the band has felt uneasy with itself, and I think that's reflected in the music. I was only talking the other day about an album called 'Nobody's Perfect', and I thought, 'This epitomizes everything that's not right about DEEP PURPLE.' And you hear other songs, like Mark II stuff and 'Perfect Strangers' perhaps and the more recent material, where you think, 'Yeah, the band was hot then.' 'Cause you were asking earlier, in your first question, 'Is [DEEP PURPLE] on top of the game now?' and I think those are the times it shows. And the reasons for that are the same when anyone's on top of their game. If you see an athlete perfoming well, you know they're relaxed, because if they're tense, they don't do so good; you never deliver such good stuff when you're tense and uneasy. But when you're relaxed and fluid and there's some common thinking and you've got a mutual idea of what you're after, it works very well."

DEEP PURPLE and JUDAS PRIEST will embark on a co-headlining North American tour this summer. Produced by Live Nation, the outing will kick off August 21 in Cincinnati, Ohio and visit 25 cities across the U.S. and Canada before wrapping September 30 in Wheatland, California.