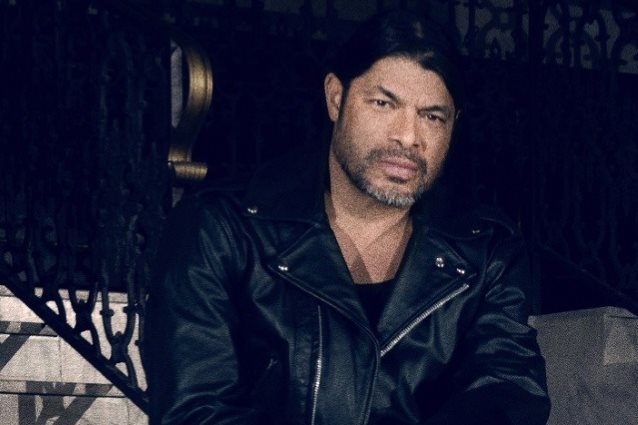 Robert Trujillo says that other bands have followed METALLICA's path by request therapeutic intervention when faced with personal turmoil.

The San Francisco heavy metal giants' 2004 documentary, "Metallica: Some Kind Of Monster", followed the band through the three most turbulent years of their long career, during which they battled through addiction, lineup changes, fan backlash and the near-disintegration of the group while making their "St. Anger" album.

While initially helping METALLICA towards restoring band harmony, the film showed "performance coach" Phil Towle, who was brought into the picture in January 2001 to help frontman James Hetfield, guitarist Kirk Hammett and drummer Lars Ulrich repair their relationship with bassist Jason Newsted, attempting to increasingly insert himself into the band's creative process, submitting lyrics for the album and even attempting to join them on the road.

In a brand new interview with Sweden's SVT, Trujillo — who joined METALLICA in 2003 as Newsted's replacement — said that working with Towle helped keep the group from an eventual meltdown and provided the bandmembers with the necessary tools to be able to communicate with each other.

"When we have an issue or a problem, we get together, we talk about it," he said. "And as long as there's that communication, it gets resolved."

Although METALLICA isn't the first high-profile arena-rock band to seek out therapy — Towle (who is not a trained psychologist or psychiatrist) also worked with RAGE AGAINST THE MACHINE — "METALLICA might have been the first band in the metal universe to take that on and be open to it," Robert told SVT. "And I found that other bands have kind of followed the same path. A lot of my friends [have told me], 'Oh, we had a bit of a therapy session. We had some problems.'"

As is the case with guitarist Kirk Hammett, Trujillo says that his role in METALLICA is to serve as a real-life mediator between Hetfield and Ulrich, who have a solid friendship but sometimes butt heads.

"My position in every band that I've ever been with — working with Ozzy Osbourne at the height of his addictions; and working with Jerry Cantrell from ALICE IN CHAINS when he was battling his demons; SUICIDAL TENDENCIES and what was going on in that camp; and then, of course, joining METALLICA — [my approach has always been], 'Okay, 'I'm here. There's a storm around me. How do I navigate this?' And I think the balance of my role even has to do with when I was growing up around my father and some of those challenges there, and trying to be the glue and understand, 'We have a situation here. How can I help?' And that, to me, is, I guess, my role in this band."

METALLICA released a tenth-anniversary two-disc Blu-ray edition of "Metallica: Some Kind Of Monster" in November 2014.

According to Ulrich, METALLICA had no idea how fans would respond to seeing footage of the band's touchy-feeling therapy sessions that ultimately healed the group and kept METALLICA from splitting up.

"As much as you want to control how people react, there are always things that throw you for a loop," Ulrich explained. "The fact that the music world was a little bewildered by it and the fact that the movie world sort of embraced the film was not something we would've predicted."