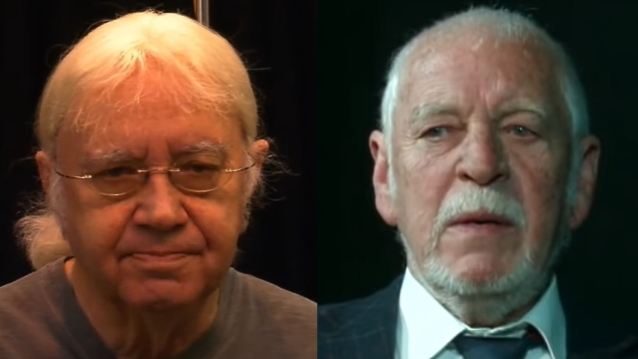 DEEP PURPLE's IAN PAICE Pays Tribute To PROCOL HARUM's GARY BROOKER: He Was 'One Of The Giants Of English Rock Music'

DEEP PURPLE's Ian Paice has paid tribute to PROCOL HARUM frontman Gary Brooker who died a week ago at the age of 76. He passed away at his home on Saturday, February 19 after a battle with cancer.

Earlier today, Paice uploaded a five-minute video message to his official YouTube channel in which he reflected on his friendship with Brooker and praised the late musician as "one of the giants of English rock music."

Ian said in part (as transcribed by BLABBERMOUTH.NET): "A couple of days ago, we lost one of the giants of English rock music, a good pal of mine, Gary Brooker. A totally unique voice, totally recognizable as soon as you heard it. A wonderful, different style of music that he helped create with his band PROCOL HARUM a long time ago. But when you hear those records today, they are so wonderfully perfect and so different.

"I had the great pleasure of being onstage with Gary just before the pandemic hit in 2020. He'd arranged an amazingly big benefit show at the O2 Arena — sold out, sixteen thousand-something people. Well, why wouldn't it be? He got some of his best friends to come and do it: Eric Clapton, Tom Jones, Van Morrison, Bonnie Tyler, Paul Young… It just went on and on and on. And I had the privilege of playing in the house band behind all these great artists. And in that one night, he raised over a million pounds for The [Royal] Marsden Hospital. That's something.

"And now he's gone. And apart from the recordings, I'll never get to say hi to him again; I'll never hear that wonderful voice live again. And that really is something to be missed.

"Gary — what an artist and what a nice man."

Brooker's death was announced in a statement on PROCOL HARUM's official web site. The statement read: "With the deepest regret we must announce the death on February 19 2022 of Gary Brooker MBE, singer, pianist and composer of PROCOL HARUM, and a brightly-shining, irreplaceable light in the music industry."

In addition to his work with PROCOL HARUM, Brooker released four solo albums and wrote and sang for Eric Clapton's band and with BILL WYMAN’S RHYTHM KINGS. He also toured with Ringo Starr's band RINGO'S ALL-STARRS.

Nearly two decades ago, Brooker was made an MBE — member of the Order of the British Empire — by Queen Elizabeth II for services to charity.