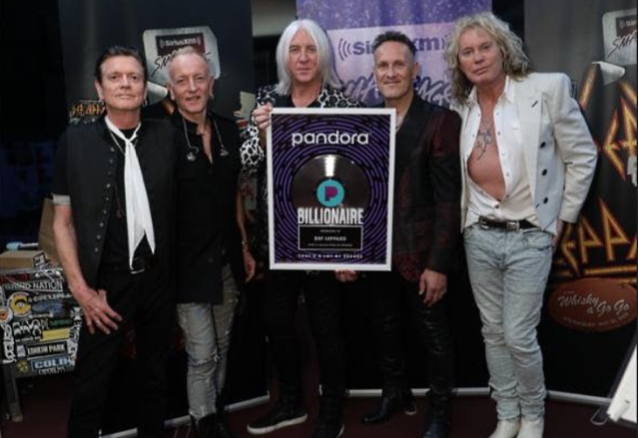 Rock And Roll Hall Of Fame-inducted icons and rock music legends DEF LEPPARD have surpassed yet another benchmark. The band was awarded Pandora's Billionaire plaque tallying over 2.5 billion total plays and counting on the platform to date. The band is currently featured on Pandora's "Hard Rock Billionaires" station, which is composed of all the billion-streaming hard rock artists in Pandora history. Executives from Pandora and SiriusXM surprised the group backstage at their recent exclusive club show at the Whisky A Go Go in West Hollywood, California, where they presented the band with the incredible honor.

The U.K. quintet unleashed its chart-dominating twelfth studio album, "Diamond Star Halos" (UMe) to global praise. The album notably bowed at No. 1 on Billboard's Hard Rock chart. The album also scored a Top 10 debut on the Billboard 200 chart, marking the band's eighth Top 10 album of their career. Billboard raved, "DEF LEPPARD keep the rock rolling along with 'Diamond Star Halos', their 12th studio album," and American Songwriter hailed it as "a requiem of DEF LEPPARD's music past, and present." Classic Rock rated it "4 out of 5 stars" and proclaimed, "DEF LEPPARD have just released their best album in 30 years."

This summer, DEF LEPPARD are co-headlining the massive 36-city "The Stadium Tour" with MÖTLEY CRÜE joined by special guests POISON and Joan Jett.

With more than 110 million albums sold worldwide and two prestigious Diamond Awards in the U.S., 2019 Rock And Roll Hall Of Fame inductees DEF LEPPARD — Joe Elliott (vocals),Phil Collen (guitar),Rick Savage (bass),Vivian Campbell (guitar) and Rick Allen (drums) — continue to be one of the most important forces in rock music. Over the course of their career the band has produced a series of classic ground-breaking albums that set the bar for generations of music fans and artists alike. The group's spectacular live shows and arsenal of hits have become synonymous with their name, leading DEF LEPPARD to be heralded as one of the world's greatest live rock bands.

DEF LEPPARD's influential career includes numerous hit singles and ground-breaking multi-platinum albums—including two of the best-selling albums of all time, "Pyromania" and "Hysteria", capturing the group's legendary tracks, bringing together classic LEPPARD hits such as "Rock Of Ages", "Pour Some Sugar On Me" and "Foolin'". For the first time, in January 2018 DEF LEPPARD debuted their full recording catalog worldwide via streaming and download platforms. As they did with the original release of their records, DEF LEPPARD dominated the worldwide charts again. Chart stats saw their albums charting in the iTunes Top 10 in more than 30 countries, including "Hysteria" at No. 3 in the U.S., and No. 5 in the U.K. DEF LEPPARD had the No. 1, No. 2 and No. 3 records on the U.S. catalog albums chart. The band have amassed a staggering 5.5 billion streams since 2018, reaching a younger 18-44 demographic that now represents 58% of their fanbase. Additionally, the band have garnered an impressive 15 million followers across their social media platforms.

Following the close of their historic 2018 co-headline stadium and arena run in North America, DEF LEPPARD sold a staggering 1,000,000 tickets and the tour grossed over $100,000,000.00, a massive feat in today's touring world.