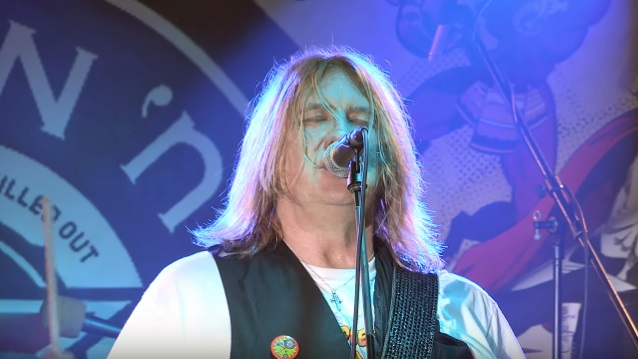 DOWN 'N' OUTZ, the project founded and fronted by DEF LEPPARD's Joe Elliott, is working on its third studio album, tentatively due in 2019. Unlike the first two records, which consisted solely of covers of songs by artists related to MOTT THE HOOPLE, such as MOTT, BRITISH LIONS and Ian Hunter, the upcoming disc will include original material "inspired by" MOTT THE HOOPLE.

"It's easy to say, 'Oh, let's write a song that sounds like, you know, [THE TUBES'] 'White Punks On Dope',' and you can — you just kind of write something in the spirit of it, or write a song that sounds like AC/DC," Elliott said during a recent appearance on MÖTLEY CRÜE and SIXX:A.M. bassist Nikki Sixx's syndicated rock radio show "Sixx Sense With Nikki Sixx" (hear audio below). "It's not difficult to do. It might not be any good, but it'll be in the spirit of it. So what we're doing is just channelling all the bands of that nature. So it's a little bit MOTT, it's a lot Elton [John] and QUEEN and HUMBLE PIE, a little bit [Bruce] Springsteen-ish even. It's just got a bit more, not LEPPARD, for a start, 'cause there's a lot of piano involved, so it's a lot more scope in that respect to just go in areas that I've never really been before."

Elliott said that he wrote all the songs for DOWN 'N' OUTZ's third album on a piano. "I didn't wanna be in a position where, you know, when you've got two bands on the go, you always are gonna be playing with that thing, like, 'Should I be saving this for me other band?' because it's that kind of a song," he explained. "So I was kind of purposely writing stuff that absolutely would not work for LEPPARD, but works for me. And it's great to get these ideas out of your head, 'cause some of them have been sitting in there for, you know, years. And it's, like, 'Oh, I finally found an outlet for this thing.' So that has been an absolute blast."

According to Elliott, he is"halfway through" the production process for the upcoming DOWN 'N' OUTZ album, which is "not due for a while." He added: "But I've gotta get it finished before LEPPARD go back out on the road. I don't think I actually have to deliver it until, like, September next year but LEPPARD go out on the road sometime next year. So I've kind of gotta get it mostly finished before we go out — at least all the recording done. The mixes we can tweak as we go along, but I wanna get kind of behind the 8-ball a little bit and bash it into shape so that when I do get to that stage where you're running out of time, it's 99 percent finished, which is always a good way to be."

All the songs for DOWN 'N' OUTZ's third album were written by Elliott. "But the [other] guys are all gonna come in and we're gonna play through it [as a band]" he explained.

"I'm trying to think of a comparison here, 'cause it's not like a band situation in the sense of, like, you you guys or LEPPARD or whatever," he continued. "It's more like I'd imagine Tom Petty and THE HEARTBREAKERS when Tom goes, 'Okay, guys, these are my ten songs for this year.' And they interpret his chords and add their little flavors to it. I want these guys to come in and absolutely… They're not just gonna copy the parts, they'll contribute their own style and add to the flavors, which is what it's all about. We just haven't got to that level yet, but I just know that the level that it's at at the moment, it's really sounding good."

DOWN 'N' OUTZ released a brand new live album, "The Further Live Adventures Of ...", on December 1 via Frontiers Music Srl. The disc, recorded in Sheffield Corporation in December 2014, was made available 2CD/DVD, Blu-ray, vinyl and digital. In addition, on the same day, the band reissued its previous records "My ReGeneration" and "The Further Adventures Of ..." on CD, LP and digital.