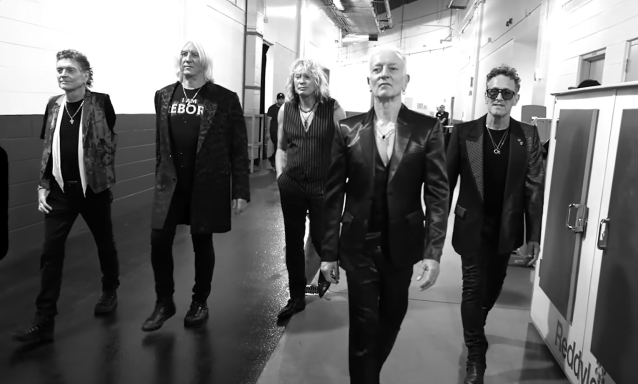 DEF LEPPARD has released the thirteenth in a series of behind-the-scenes episodes from "The Stadium Tour", which kicked off on June 16 in Atlanta, Georgia and concluded on September 9 in Las Vegas, Nevada. Episode 13 takes you backstage with the members of DEF LEPPARD in Seattle, Vancouver and Edmonton.

The veteran British rockers co-headlined "The Stadium Tour" with MÖTLEY CRÜE, with support from POISON and JOAN JETT & THE BLACKHEARTS.

DEF LEPPARD's set on the tour included some of the band's biggest hits, such as "Pour Some Sugar On Me", "Photograph" and "Rock Of Ages" — as well as songs from the group's latest album, "Diamond Star Halos", among them "Kick" and "Fire It Up".

DEF LEPPARD's long-delayed North American trek was originally planned for 2020 and later moved to 2021 and then to 2022.

"The Stadium Tour" marked the CRÜE's first live dates since wrapping its 2014/2015 farewell tour. CRÜE toured with POISON back in 2011 and DEF LEPPARD teamed up with POISON for a string of road dates in 2017, but this jaunt was the first time all four acts had hit the road together for an extended tour.