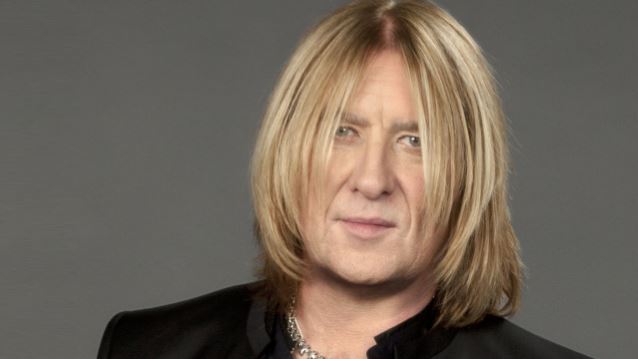 In a brand new interview with Maxim.com, DEF LEPPARD singer Joe Elliott was asked for his opinion on streaming music services such as Spotify and Pandora. He responded: "I signed up for the Apple one, Beats. It's kind of semi-evil, because whoever owns Spotify is worth more than 50 times than Mick Jagger, who's been in this business for 50 years. And that's just not right. Because when you read stories about Lady Gaga getting 127 dollars for 60 trillion plays, or whatever, you're thinking, this is bullshit. And when you get on Spotify, it's very insular. Which the whole industry has become. Everybody is on headphones now. It's just Zombieland, and we're all guilty of it. I do it too, but only when it's necessary, like on an airplane."

Elliott also talked about whether it's likely that anyone will ever sell a hundred million physical records — like DEF LEPPARD did — in the age of streaming.

"In this day and age, no," he said. "But who knows what could happen in 20 years time? Something could happen where everything digital gets lost because the atmosphere changes. Who knows what the fuck's going to happen?"

He continued: "If you'd have said to me ten years ago that vinyl factories would start re-opening, I'd just laugh at you. They're opening everywhere. Why, I don't know. I don't get it. I understand it from a fan point of view, and I love that music brings that obsessiveness out in people. When my mates turn up and say, 'Oh, I got this vinyl blah blah blah,' I say, 'Really? What's it sound like in the car? Or in an airplane? Or on the treadmill?"

DEF LEPPARD's first new studio album since 2008's "Songs From The Sparkle Lounge" will be released on October 30. The self-titled CD was recorded earlier this year at Joe Elliott's studio in Dublin, Ireland.