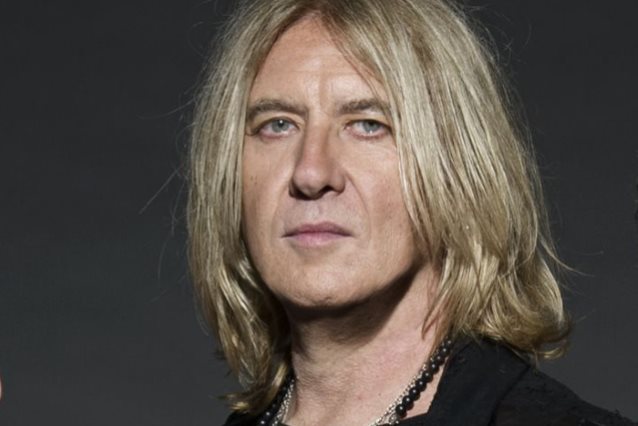 DEF LEPPARD's JOE ELLIOTT On AC/DC's Handling Of BRIAN JOHNSON's Hearing Loss: 'I Wouldn't Have Done It Like That'

DEF LEPPARD's Joe Elliott says that Axl Rose "did a pretty good job" fronting AC/DC but he believes that the legendary Australian hard rock outfit could have handled Brian Johnson's apparent exit from the group differently.

AC/DC postponed the last ten dates of its North American tour last year after doctors told Johnson he faced a total loss of hearing if he did not stop touring immediately. AC/DC completed the tour last summer, with the GUNS N' ROSES singer as a "guest vocalist" and Johnson seemingly not returning to the group.

During a recent interview with the "Life In The Stocks", Elliott was asked what he thought of the way AC/DC handled Johnson's hearing issues and the band's decision to complete the tour with Rose.

"I wouldn't have done it like that," the DEF LEPPARD singer said. "I can't speak for Angus [Young, AC/DC guitarist] and his team as to what their reasons were for doing what they did, but considering that we had a drummer lose and arm and we waited for him, the way that they dealt with it was not the way I would have done it, put it that way."

Although Elliott didn't get a chance to catch any of the Rose-fronted AC/DC shows in person, "I saw some stuff on YouTube, and I think he did a pretty good job, actually," he said. "[Axl is] a huge fan, so he took to that like I would take to singing a MOTT [THE HOOPLE] song."

Joe, however, understands perfectly well some AC/DC fans' reluctance to embrace Rose as the band's new lead singer. "Obviously, there's detractors in any walk of life, so somebody out there thinks he was awful, some people think it was the best thing ever," he said. "So it is what it is, but it kept AC/DC on the road, I suppose. But it's not really AC/DC anymore, is it? I mean, you've got Chris Slade on drums, [bassist] Cliff Williams in now retired, God bless him, but Malcolm [Young, guitar] is in a nursing home. [Editor's note: The interview was conducted before Malcolm Young's recent passing.] So they've got Stevie Young, who used to be in STARFIGHTERS, [who] opened for DEF LEPPARD in 1981… '83, was it? And him and Fraser Young, the other cousin, used to sell t-shirts for us in 1980, on the 'On Through The Night' tour. So you're looking at… it's basically just Angus and the other four now. So I don't know that Brian's ever gonna come back."

While Elliott has a strong affinity for the Bon Scott era of AC/DC, he believes that "the 'Back In Black' tour was pretty good, I've gotta say. I saw 'em live, and I think Jonna [Brian Johnson] really… he stepped up to the plate. It's a hard thing to do, but I suppose he was fortunate in the fact that 'Back In Black' was a bigger album than anything that they'd done before, so to a lot of people, they hadn't even heard Bon Scott — it was like a new band. Outside of the U.K. and Australia, in America it was their first really big record."

As the singer of a band whose "Hysteria" album was DEF LEPPARD's second consecutive RIAA diamond-certified record (10 million sales in the U.S.),Elliott can't help but be impressed by the massive commercial success of Johnson's recorded debut with AC/DC.

"'Back In Black''s sold way more than 'Hysteria' — probably 35 million [worldwide], whereas we're somewhere [around] 23, 24, something like that," Joe said. "Put it into that context, it sounds like I'm complaining — I'm really not. I'm just saying it's a phenomenal amount of records. I think 'Back In Black''s pretty much close to selling the same [as], if not more than, [Michael Jackson's] 'Thriller', and there's not many black people who would have bought 'Back In Black'. So that's a phenomenal amount of records to sell. And it's one of those records that never dies — it keeps popping up on the soundtrack of 'Iron Man' and it keeps popping up in God knows how many movies, songs from 'Back In Black' are featured in, and that helps keep it alive. It's a brilliant record; it's a fantastic record. I remember the first time we ever heard it — we heard it before it came out, 'cause [former DEF LEPPARD manager Peter] Mensch came on the bus with a cassette. He said, 'Listen to this,' and we were, like, 'Woah!' It was something special."

DEF LEPPARD drummer Rick Allen was involved in a car accident in the winter of 1984 that cost him his left arm. Instead of just getting another drummer, the band actually waited for him to re-learn playing drums using one arm.