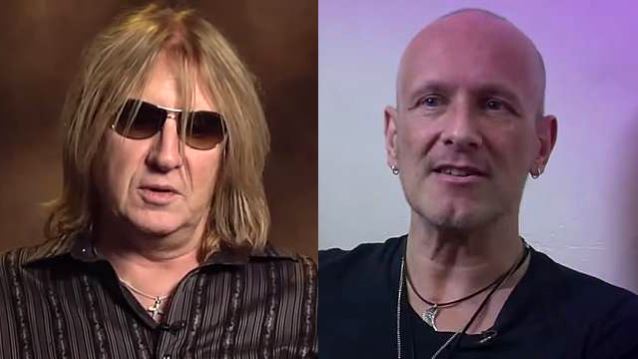 DEF LEPPARD guitarist Vivian Campbell, whose cancer is once again in "remission," has just finished undergoing a new round of chemotherapy before receiving a stem-cell transplant later in the month.

During an interview with the "92 Minutes Of Hair With Mel" show on the Las Vegas, Nevada radio station KOMP 92.3 on Sunday (September 21),DEF LEPPARD singer Joe Elliott offered an update on Vivian's condition. He said (hear audio below): "Vivian, for the second time, is now in remission. The first time, we were told her was in remission, and he was, but it didn't take, it didn't stay, it came back. But this time, through clever management with his doctors, they were able to monitor him through [DEF LEPPARD's] whole tour [with KISS], so he could do the tour with KISS this summer. And as we speak, he's getting ready to go in to have stem-cell surgery, which will, hopefully, get rid of this thing once and for all. So, up until Christmas, he's gonna be kind of out of action, because once they start on this, they have to keep him so locked down and away from germs and stuff, I think anybody visiting him has to put on one of those, like, nuclear suits. You know, it looks like you're in space almost. He'll be locked away, and he'll be the boy in the bubble. But he's very confident that he can do this, and his spirits are great."

He continued: "Other than a couple of days where he just had chemo, and he really was barely able to stand, he was fantastic on this tour. He really kept it together, and he played well, and he was in great spirits. He's always a fun guy to be around; he's got a great Irish sense of humor. And he's using all those positives, and he's battling against this evil disease. And we're doing everything that we can to enable him to do that. And one of those things was letting him do this tour, because we said, 'Viv, by all means, stay at home for the summer. We'll get a stunt Vivian for a few weeks. AEROSMITH have done this. Loads of people have [done it]. We can do that.' And he says, 'No, no, no, no, no. This is as much mental as it is physical for me. I have to have a focus. I wanna do the tour.' So we were, like, 'Hey, if that helps you, great.'

"So that's what I know so far. It's positive thinking. We don't know what the final outcome is, and we won't until next year…

"I don't wanna say too much, because I don't know… Vivian could phone me up tomorrow and totally blow out of the water what I just said to you today. But as far as I'm aware, everything's on the up. And he's really looking forward… Nobody looks forward to doing this, but he's looking forward to getting through this so that he can have the rest of his life on the other side cancer-free. And we have met loads of people over the last two years or so since he announced this that are survivors of 25-30 years of the same [disease], Hodgkin's lymphoma, so we know it's doable. And all we can do is keep our fingers crossed and wait until he sends us updates."

While Campbell is undergoing stem-cell treatment, he will be unable to join his bandmates as they complete work on their new studio album, which is tentatively due in April or May of next year. The guitarist will also be forced to miss the band's next few live appearances, including the pre-game show at the first of this year's three NFL International Series games on Sunday, September 28, when the Oakland Raiders host the Miami Dolphins; as well as shows in Las Vegas, Santa Ynez, Rancho Mirage and Temecula.

Regarding the progress of the recording sessions for DEF LEPPARD's next CD, Elliott told Crash Davis of the Omaha, Nebraska radio station KFAB earlier in the month (hear audio below): "We started… We did a bunch of recording in February and May. We did a little bit of stuff on the road, because, to be quite honest, with Vivian's cancer, even though it's in remission, he's going in for stem-cell surgery in a week or 10 days time, and he's gonna be unavailable and incognito and wrapped up in, you know, basically, the boy in the bubble up to maybe Christmas so he can blitz this thing once and for all, which means that any work that he needs to do on the record, we had to make sure it was done before this happened. So we had him in… On days off [on the road], we had him in a hotel room with his guitar and a microphone ready to do backing vocals and guitar solos and all sorts of mad stuff, so that we could get on with the record when he's in hospital and the tour's finished. So we get back to work on that record this autumn, or fall, as you guys call it, and hopefully we'll have the thing — you know, artwork, titles, running order — all nailed by January. We wanna put the record out by April-May. And we'll start thinking then about where we're gonna go and play. It looks like we may start off on the other side of the world — in, like, Australia, New Zealand and Japan, etc. — and then work our way back through Europe and then come to the States [in] July-August."

"92 Minutes Of Hair With Mel" interview: