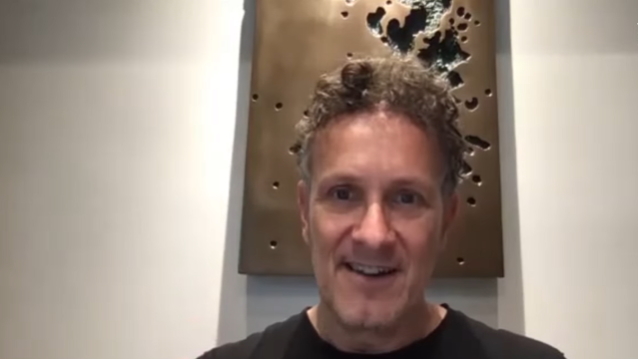 In a new interview with Greece's Rock Pages, DEF LEPPARD and LAST IN LINE guitarist Vivian Campbell was asked if he would like to make a follow-up album to his solo debut, 2005's "Two Sides Of If". He responded (as transcribed by BLABBERMOUTH.NET): "Yes, would be the short answer. But in reality, working with DEF LEPPARD and working with LAST IN LINE, that keeps me pretty busy.

"Like many people have said, when COVID happened and everything sort of stopped, a lot of people re-thought how they're living their lives," he continued. "For me, it really made me realize how busy I've been for the last 10 years or so. Because when I wasn't working with DEF LEPPARD, I was on the road with LAST IN LINE, and it was just constant, constant travel — home for a day, gone again. So I really appreciated having the time off and I got to do other things in my life that I'd always wanted to do. I really got into rally driving and had fun with cars. But having said that, now we're getting back to work, We're in L.A. at the moment rehearsing for the tour with DEF LEPPARD, and I go home for 12 days between rehearsal and tour, and in those 12 days I need to record guitar solos for the new LAST IN LINE record. So, again, there's so much [stuff going on].

"Two Sides Of If" featured Vivian doing two things you probably hadn't heard him do much before — singing lead and playing blues-based guitar. It was a collection of Campbell's favorite blues songs, including WILLIE DIXON's "I Ain't Superstitious" and "Spoonful", FLEETWOOD MAC's "Like It This Way", RORY GALLAGHER's "Calling Card", and MEL LONDON's "Messin' With The Kid".

Campbell told Launch that his love for the kind of music on "Two Sides Of If" goes way back. "I have always had an affinity for organic music, whether it was blues, or organic pop, or soul, or whatever which may seem strange, coming from a guy who plays guitar with DEF LEPPARD, who are probably the most produced band in the world," he said. "And with blues, you know, and particularly with this record, I did it live in the studio, because I wanted it to have that interaction between real musicians playing music in real time."

In a 2005 interview with ModernGuitars.com, Campbell explained his reasons for doing a solo album.

"About twenty years ago, my wife heard me sing," he said. "She said, 'You know, you sing like a blues guy. You play guitar like a blues guy, too. Maybe you should do a blues record.' I laughed and told her to go away and stop being a silly woman. [Laughs] I didn't think much about it, but I always knew that the way I played was more akin to blues than anything else. I let my left hand do most of the work, and I'm basically a down-stroke picker. I fret pretty hard with my left hand, so that articulates the note. So, a couple of years ago I got roped into playing a blues set at my daughter's school fundraiser. You know how it is, when you have kids, you do these fundraiser events. They had a band, and they asked me to do a blues set. So I got up and did four or five songs. That's where I met Tor, the keyboard player. He had put together the little band because his daughter went to the same school as mine. We did the set, and he told me that he thought I should do a blues record. He also said that he thought I sounded like a blues singer. I said, 'Okay. We'll make it happen.' Tor went out and made a few calls and got a bit of interest, so I said, 'Why not, let’s do it.'"

In 2011, Vivian released a solo song titled "Seems So Real". The track was written by Campbell and Robert Cosio and was produced by Cosio. Mixing duties were handled by Ronan McHugh.