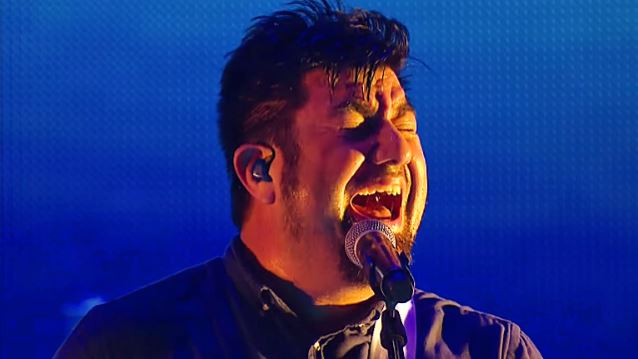 DEFTONES Frontman Says He Would 'Definitely' Play Shows With KORN

DEFTONES singer Chino Moreno says that he would "definitely" tour with KORN — despite previously admitting that his band was once trying to avoid playing shows with the Jonathan Davis-fronted outfit.

Moreno's latest comments come only days after he and guitarist Stephen Carpenter were quoted by Metal Hammer magazine — in an an article focusing on the upcoming twentieth anniversary of DEFTONES' "Around The Fur" album — as saying that they were very selective about who they toured with earlier in their career and even turned down tours with groups like KORN in order to avoid being lumped into the so-called "nu metal" genre in the mid-'90s and early 2000s.

During an appearance on this weekend's edition of BBC Radio 1's "Rock Show With Daniel P. Carter", Moreno was asked which band he would most like to tour with. He responded (hear audio below): "I'm gonna go ahead and say KORN — contrary to all the hate mail I woke up to yesterday.

"It's funny, too, 'cause this is, like, 1998 when they [Metal Hammer] are asking me about 'Around The Fur'. [At the time we] sort of made a conscious decision to, I guess, try to break away from what we were trying to be shoved into. Not that we felt better than KORN and LIMP BIZKIT and all the other bands, but we just wanted, really, our own identity. One way of helping with that was to do shows on our own and away from what we were getting lumped into. So that's all. But it's just funny how, like, blown out of proportion people get."

In the Metal Hammer interview, Carpenter said that DEFTONES wasn't very concerned with genre labels, explaining, "We didn't really pay much attention to that. I remember when these subgenre names didn't exist. It was just metal. So I don't think we made a decision to step away from it — we've never paid attention to what anyone else was doing. We just did what we thought was right, and tried to make a killer album."

Moreno, however, admitted that the members of DEFTONES were cautious about who they toured with, saying, "It was hard to be this young band and having to turn down tours. I can't remember how many times I turned down KORN! And they got pissed at us. Jonathan [Davis] would say, 'Why do you hate us?' and I didn't know what to say."

For a while in the late '90s and early 2000s, there were press reports of a feud between the two bands, which Carpenter debunked at the time. "The rivalry is media-made-up," the guitarist said. "It's been that way ever since the start. Those guys are friends of ours, you know. We all met each other before either of us put our first record out and played shows together, and we just had great times hanging out and all that, you know. It was always just made up. We were always constantly going, 'Man, how does this stuff happen?'"

KORN guitarist Brian "Head" Welch said more recently about DEFTONES: "We're not close with 'em. They just like to do their own thing. We would like to tour with 'em again one day, but I don't think they want to, so… But it's all good."

DEFTONES continues to tour in support of its latest disc, 2016's "Gore", and starts a new North American run on June 9 in Chicago.

KORN recently postponed more than half a dozen headlining tour dates that the band was set to play this month due to what the band called in a statement "unforeseen circumstances." The group's summer trek with STONE SOUR is set to get underway on June 16 in Salt Lake City.