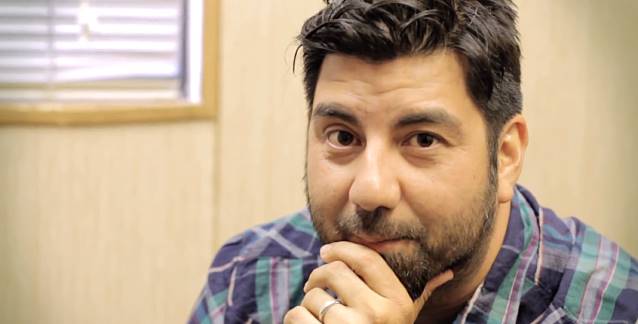 DEFTONES vocalist Chino Moreno tells RollingStone.com in a new interview that the band is taking a break before regrouping to start thinking about the next CD. "We just finished a tour, so we're gonna take the rest of the year off," he says. "We're gonna start writing some music early next year. I just moved to Oregon and Stephen [Carpenter, guitar] is down in L.A. and Abe [Cunningham, drums] and Frank [Delgado, keyboards] are in Sacramento, and Sergio [Vega, bass] is in Europe."

Moreno adds: "The idea is to just get together. The last couple records, we just threw ourselves into a small room and started playing. We just work organically, which I think works better than me writing a song and saying, 'Hey, guys, learn this.' Hopefully in February [2015], we'll spend a couple weeks together, and just kind of get together and write music."

Moreno also spoke about last year's passing of DEFTONES bassist Chi Cheng, more than four years after Chi was left in a semi-comatose state by a car accident in November 2008.

"[Chi will] always be thought about on a day-to-day basis," Moreno says. "It's not something that goes away, obviously. I think that when he did pass, it was very hard. It was five years where he was in a state where he couldn't speak. He was existing, but not existing. He was here, but not here."

Moreno continues: "I feel like with his passing, not to get back into the supernatural, he is more with us now then he was in the five years when he was stuck in that sort of in-between space. It's a little bit of a relief, because I know that he's not suffering. There's not a day that goes by that I don't think of him."

††† (CROSSES) — Moreno's project with FAR guitarist Shaun Lopez — will release its self-titled full-length debut on February 11 via Sumerian Records. The CD will include the songs from ††† (CROSSES)'s two previously released EPs — 2011's "†" and 2012's "††", along with five new tracks.