Commenting Asheim: "ORDER OF ENNEAD are really psyched about our deal with Earache Records. The possibilities afforded us by this deal are endless. So watch out for us on the road and in stores very soon. I can't wait to get on tour with this band and see what people think."

Commented Patrick: "I am totally stoked to be picked up by Earache, their support in the extreme/death/black/grind genre is unparalleled in my opinion. To that point I know Earache is the right home for us! Working with Mark Lewis at AudioHammer is killer, that cat knows what metal is supposed to sound like in the 21st century. ORDER OF ENNEAD's music, lyric content, and live shows will turn heads world-wide. I can't wait to tour for this act, showing the masses just how extreme our delivery of the extreme metal genre can be."

Footage of Steve Asheim laying down drum tracks for the album can be viewed below.

ORDER OF ENNEAD's debut album is due for a release in October, followed by widespread touring. 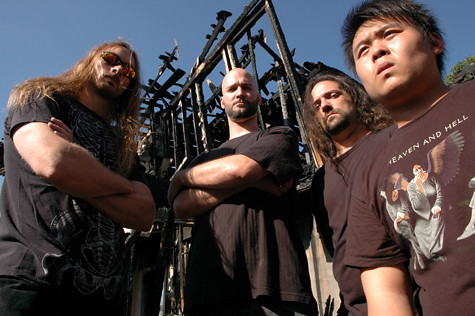