DEICIDE Has 'Eight Or Nine Songs' For Upcoming Album

Metal Wani's Jackie Mtz conducted an interview with drummer Steve Asheim of Florida death metal veterans DEICIDE on May 12 in Phoenix, Arizona. You can now listen to the chat in the YouTube clip below. A couple of excerpts from the chat follow (transcribed by BLABBERMOUTH.NET).

On the progress of the songwriting sessions for DEICIDE's follow-up to 2013's "In The Minds Of Evil" album:

Steve: "We've got about eight or nine songs, and we're gonna do another three or four; we'll pull together when we get back from this tour. And if we can pull that music together, the ten or twelve songs, whatever it might be, and maybe get into the studio and start doing the drums and the music by the end of the year or something, we can have something out by next year. I doubt we'll have anything out by this year."

On the musical direction of the new DEICIDE material:

Steve: "It seems like we're gonna be taking the same approach. I mean, we're not gonna fix what isn't broken, as far as what we do. You know, we've been writing heavy riffs. We're just gonna make 'em heavier as work [on] them together. It was weird. When we did the last record, I was, like, 'Eh, I'm really not that psyched about these songs,' and the album turned out being great. And the way the new material is, it's funny, I'm kind of, like, 'Eh, it could be better.' So we're just gonna be hashing some more stuff out and really make it intense, because we know we did a pretty good one and we're gonna have to beat it. But we're gonna work on it hard, make sure it's good."

On what inspires DEICIDE to keep making new music:

Steve: "Well, you know, just wanting to be heavy. We have a nice, steady band lineup that is focused, and we feel that we can really do some good work now that everyone's kind of on the same page. So as long as we focus our riffs and focus our energies on making the songs good and doing good tours, it's gonna give us another few years, another few records, and a good number of years left ahead of us to keep doing this. It still feels good, it's fun, and we'll keep at it as long as we can keep going."

"In The Minds Of Evil" sold 2,600 copies in the United States in its first week of release. Issued on November 25, 2013 via Century Media Records, the follow-up to 2011's "To Hell With God" was recorded at AudioHammer Studios in Sanford, Florida with producer Jason Suecof (TRIVIUM, AUGUST BURNS RED, THE BLACK DAHLIA MURDER, ALL THAT REMAINS, WHITECHAPEL, DEVILDRIVER). 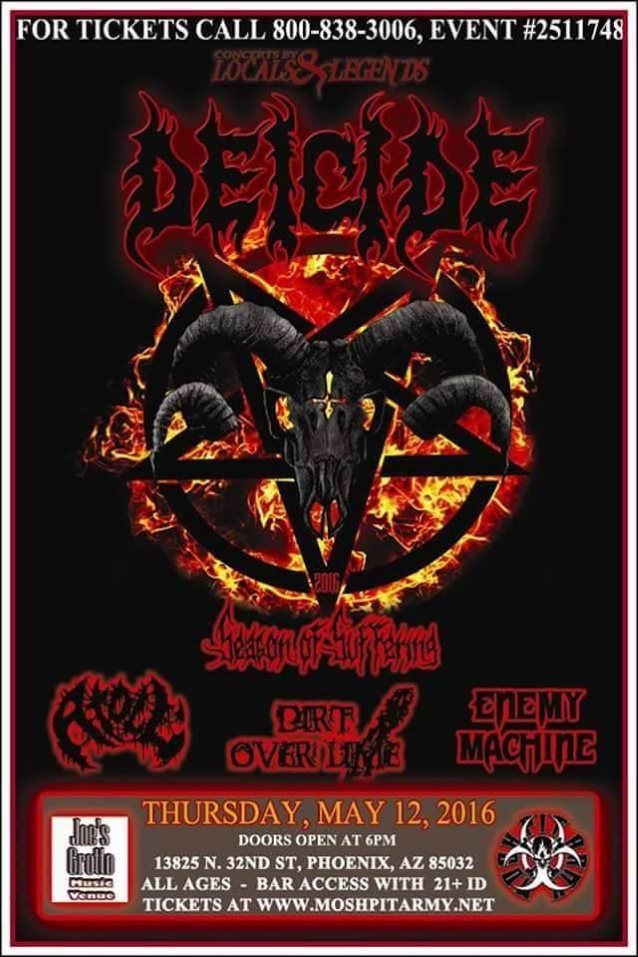