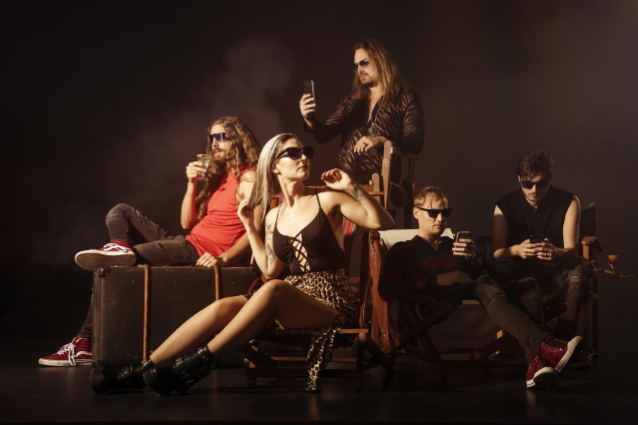 DELAIN keyboardist Martijn Westerholt recently spoke with The Mike James Rock Show. The full conversation can be seen below. A few excerpts follow (as transcribed by BLABBERMOUTH.NET).

On the title of the group's new album, "Apocalypse & Chill" — a nod to the popular expression "Netflix and chill":

Martijn: "To be honest, I didn't hear of that phrase [before]. Actually, I only heard of it because of Charlotte [Wessels, vocals], so I'm learning things too. But I do have Netflix."

On the gap between the release of 2016's "Moonbathers" and the new album:

Martijn: "We realized we released something every single year since 2012. [Besides albums,] we released a Blu-ray or we released an EP — something like that — so every year, there was a release, and every release brings a lot of work, even if it's not an album. We decided that we're not going to do that anymore. We're going to focus more on just writing for an album and not doing all these other separate releases, because they're highly distracting. That was more one of the reasons why it took longer — we just take the time we need to write, and it all goes automatically. There's not really a plan. Of course, you always estimate — like, 'How long will it take to write this album?' But in the end, it just takes as long as it takes."

Martijn: "We didn't record everything at one go. We kind of mixed [up] the whole process. Normally, first you write and then you record and then you master, but we did it almost song by song, because it makes you more flexible to change things, and it's kind of more the modern way of doing it."

On receiving the mixes for the album's material while touring America:

Martijn: "I remember the day that I went to this big American store, Walmart, in the morning to get breakfast, and at the same time, I took my laptop to be on WiFi there to download the next song which was mixed, so I could make tweaks and send it back to Denmark where it was mixed. It was really weird — I was in the grocery store and the supermarket checking out new stuff and giving my feedback."

Martijn: "When you're writing new stuff, it's always a completely different animal than when you play on stage and see it coming to life. Sometimes, it works better than you hoped for, and sometimes, you [think], 'Oh, this needs some work live.' It's exciting, always... I write the music, and then I have to play it, like, a year later, and I have no clue what I played. I have to figure it out again... Every song, I'm curious what people think. With every song I write, I envision being on stage playing that song and placing myself into people's minds to say, 'Okay, would they like it?', and still be true to yourself [about] what you want to write. It's kind of a way of trying to get out of the bubble to see what you're doing, to judge what you're doing and go back into it... You should not limit yourself. Sometimes, somebody says, 'You can't do it like that, because how are you going to do it live?' I always say, 'We're not going to think about that right now. Right now, we're going to think about, 'How can we write the most kick-ass song we can think of?' Later on, we worry about how we're going to execute it live."

DELAIN's sixth full-length album, the Westerholt-produced "Apocalypse & Chill", was released on February 7 via Napalm Records. The 13-track recording features guest vocals by BEAST IN BLACK singer Yannis Papadopoulos on the song "Vengeance". Upon its release, the album reached the Top 50 in several European countries, including Switzerland (No. 8),Germany (No. 14) and the band's native country, The Netherlands (No. 24).