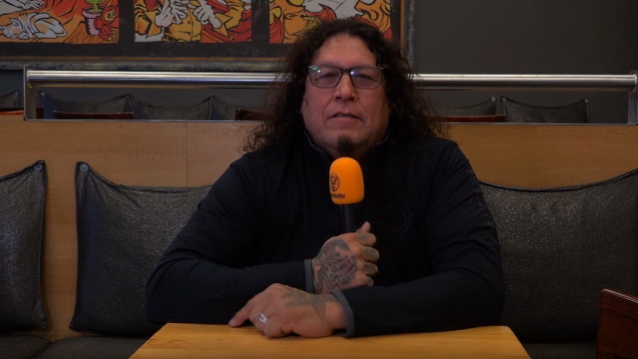 TESTAMENT Vocalist On 'Special' European Tour With DEATH ANGEL And EXODUS: 'It's Everything We Hoped It Would Be, And Better'

TESTAMENT vocalist Chuck Billy recently spoke with Finland's Kaaos TV. The full conversation can be seen below. A few excerpts follow (as transcribed by BLABBERMOUTH.NET):

On the band's recent ferry ride to Finland, which was described as "fucking terrifying" by EXODUS guitarist Gary Holt:

Chuck: "Oh my god. We were the last ferry to be able to get onto the ocean, and after us, they cut all the ferries off. Maybe we shouldn't have been out there, because it was very rough — all night long, just up and down, everybody on the boat sick. It was quite an experience, but we made it... It started at midnight, all the way through 6 in the morning. Bad. Nobody slept at night. It was just rocky, all the glasses breaking on the floor. It wasn't a fun one."

On the band's current tour with DEATH ANGEL and EXODUS:

Chuck: "So far, it's great. The fans have been excited for the tour. We're excited, because this is much different than other tours. When we do other tours, sometimes you meet the band for the first time when you get to the first show. We're all friends already, so we have a lot in common, a lot of history back home. We all know the same friends. It's very much like a family. It's very special... It's everything we hoped it would be, and better. As far as the fans, they're getting one hell of a show. It's definitely a representation of the Bay Area thrash metal sound that we all came from in the '80s, so it's awesome that we all get to spread the word, spread the love. I'm sure a lot of fans see all the bands on their own, but to have all three of us from the same era, the same movement, the same style, it's nice, and it's good that we can support each other like that."

On the similarities — and differences — between the groups:

Chuck: "I think the beauty of the Bay Area thrash metal scene is that we all grew up with METALLICA and then early EXODUS when they first came out, but all the bands that came after that like VIO-LENCE [and] FORBIDDEN, we all had our own identity, and I think that was something very special. It wasn't something that [was] planned; I think everybody just found their own style of thrash and applied it to what they're creating, which is really unique because we all have our own identity and we all sound different, but we all have the same thrash style."

On why some thrash bands "made it" and others didn't:

Chuck: "I think probably around the '90s when heavy metal kind of took a backseat to grunge music, it changed for bands, so a lot of bands either stopped playing or they got dropped from labels and took a little break. TESTAMENT didn't take a break — we kept playing along through it all. DEATH ANGEL reformed, and so did EXODUS, and since the reunion back, everybody's been writing great records and having great tours. It's like a revival again. There were some great records for those times that were for those times, but those songs and those records still hold strong today too. There's something special about that."

On the band's new album, "Titans Of Creation":

Chuck: "I think all TESTAMENT records since 'The Gathering' have been pretty strong, and I think they all don't sound the same, but we're always trying to chase ourselves to have a better song, a better mix, a better group of songs. You're always trying to do that, and it usually gets harder in the end, but maybe because we've been working together so long, we know how to work together and we know what works together for us. I think in that sense, this record when we wrote it, we kind of just took song-by-song. It wasn't like, 'Here's a concept and we're going to keep all the songs sounding like this.' That's not our style. We write song-by-song, and when we write records, we don't write extra songs for the next album. They're all for this record, so we concentrate on that. On this record, all the songs have definitely their own identity — they all feel different from each other — but if you listen to it, you go, 'Oh, that's TESTAMENT.' You would know. It's darker, and I think it's definitely thrashier than 'Brotherhood Of The Snake'. I think overall, maybe because on this record Gene [Hoglan, drums] came and worked a little closer with us on the record, and Alex [Skolnick, guitars] came to us and recorded in the Bay Area, and he wrote a couple more songs than he did on the last record, so I think maybe the involvement of everybody just really helped a little more to make it a better record... It's funny, because you don't know when you're writing songs what it's going to be, the final product. Once I heard all the mixes of the record and listened to it as a whole record, that's when I sat back and went, 'Wow, I enjoy it. It's a good-listening record. The songs are good; they all stand out; and it has a really good feeling.' That's why I said I think it's some of our best [work], because it just gave me that feeling when I heard the whole record. I didn't have that when I demoed or did the recordings – I didn't know until it was finished."

"Titans Of Creation" will be released on April 3 via Nuclear Blast. The long-awaited follow-up to 2016's "Brotherhood Of The Snake" was produced by Billy and guitarist Eric Peterson while Juan Urteaga of Trident Studios handled co-producing, recording and engineering. Andy Sneap was responsible for the mixing and mastering of the album, which features cover art by Eliran Kantor.