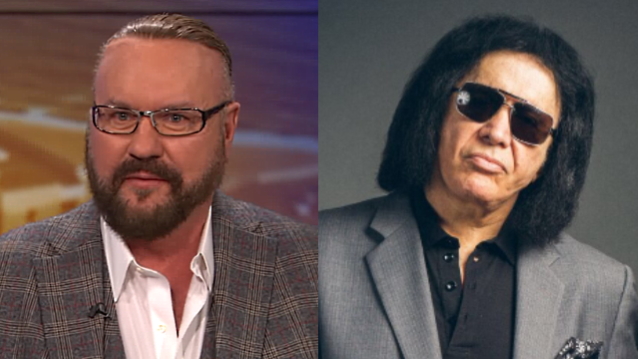 Acclaimed songwriter Desmond Child says he was hurt when KISS publicly badmouthed his collaboration with the band, "I Was Made For Lovin' You".

Although "I Was Made For Lovin' You" was a huge chart success for KISS 40 years ago, it was maligned by many of the group's fans who didn't appreciate the track's disco beat.

During a recent appearance on the "Talk Is Jericho" podcast, Child said that he wrote "I Was Made For Lovin' You" with Paul Stanley after befriending the KISS frontman in the late '70s.

"I was experimenting then with a drum machine, and the idea of having dance beats with rock had occurred to me," Desmond recalled. "So I kind of hoodwinked him into this idea of four-on-the-floor dance beat with these heavy guitars. Gene [Simmons, KISS bassist/vocalist] never bought it — he never liked it, [and] he [still] doesn't.

"I remember when they made a record — I think it was [1981's] '[Music From] 'The Elder'' — and they started doing hundreds of interviews saying, 'Well, this time, we're putting guards in front of the door to keep Desmond Child out,'" he continued. "And I was so hurt. I called Paul and I said, 'Paul, why don't you criticize your enemies, not the friends that put money in your pocket?' And he says, 'Well, you know, that's Gene — it's not me.' So, the next day I came home and there was a message on my answering machine. And it was, like, 'Hi. It's Gene. Sorry.' And he hangs up. [Laughs] That was his apology."

According to Child, he and Simmons eventually reconciled. "After all these years, he's been an amazing friend and supporter and, actually, mentor," Desmond said.

"I Was Made for Lovin' You" originally appeared on KISS's 1979 album "Dynasty". It was released as the A-side of their first single from the album. It was the band's second gold single, selling over 1 million copies. The single reached No. 11 on the U.S. Billboard singles chart. The song also became a Top 10 hit in Australia, reaching No. 6 on the ARIA charts in 1979. The song fared the best in Western Europe (Where it became a Top 20 hit in Sweden, a Top 10 hit in Norway, made it to the No. 2 position in France, Germany, Switzerland, and Austria, and in Holland it became a No. 1 smash).