Swedish melodic death/black metallers DEVIAN — who feature in their ranks former MARDUK members Legion (vocals) and Emil Dragutinovic (drums) after their departure from MARDUK — will release their second album, "God To The Illfated", in Europe through Century Media Records on the following dates:

Recorded once again at Art Decay Studio with Rickard Kottelin, DEVIAN this time around decided to hook up with HYPOCRISY/PAIN mastermind Peter Tägtgren for further production duties and the intense mixdown of the album at the Abyss studio (IMMORTAL, MARDUK, DIMMU BORGIR), while mastering was once again taken care of by Peter In De Betou of Tailor Maid Production (DIMMU BORGIR, ARCH ENEMY, DARK TRANQUILLITY).

Commented Legion: "'God To The Illfated' is the result of DEVIAN fusing together as its own powerhouse. Having the luxury of making music together with one's best friends made the new songs step up to a whole different league throughout the writing sessions: we all bled everything into the album, everything that we knew was DEVIAN and explored as much new ground as we could. The extensive touring we did last spring showed us what really works for us... jacked up and confident from slaughter on the road we let all the fire from the live shows translate onto the songs and the recording-sessions 'til we all felt that unbeatable feeling of grand accomplishment. The feeling that we had a really special beast of an album on our hands."

DEVIAN has been confirmed to appear on the "Winterfest 2009" tour in January with DEICIDE, SAMAEL, VADER and ZONARIA.

DEVIAN's first official video, for the song "Scarred", can be viewed below. The clip was shot with director Johan Bångens. 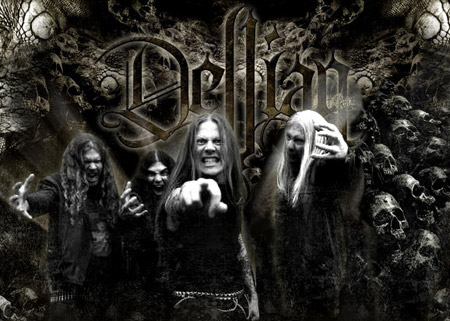