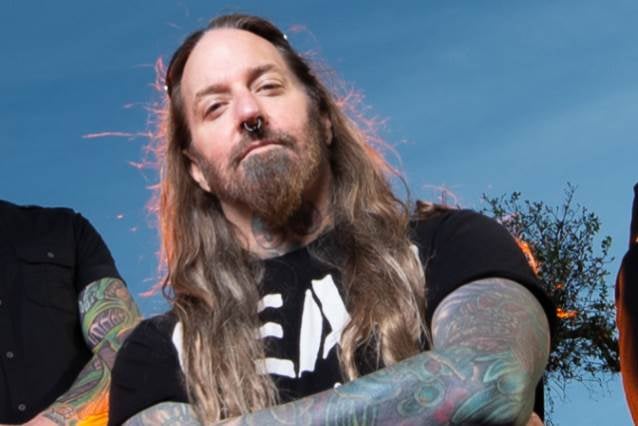 DEVILDRIVER Frontman On VINNIE PAUL: 'I Don't Like Burying Guys That Gave Me My Start In The Business'

DEVILDRIVER frontman Dez Fafara spoke to Inquisitr about the recent passing of PANTERA and HELLYEAH drummer Vinnie Paul Abbott. "It's the fucking worst, you know?" Dez said. "I don't like burying friends, I don't like burying legends and I don't like burying guys that gave me my start in the business. It's the worst. I feel for his family and for his girl right now, and for the whole heavy metal community. That guy had a light and a fucking smile that nobody else had. He never had a backstabbing moment in his fucking life. He helped everybody around him."

He continued: "So it's the fucking worst, man, but it's a physical passing. He left music. He left a lot of memories and so he'll live on, and that's what it's about in life: making a scar, so when your physical presence leaves, you leave some kind of fucking memory, y'know? Maybe you helped a local high school, maybe you built a bridge, maybe you wrote music, maybe ran a good fucking good company, maybe you helped something out."

Dez added: "We have to remember the person that he was, the smile that he had, the things that he left. I was very fortunate to tour around the world with PANTERA for years. Vinnie was the one who always spun. I mean, me and Philip [Anselmo, PANTERA singer] were very close; I lived in Philip's house. We still are very close friends."

Vinnie was buried on Saturday (June 30) next to his brother and their mother, Carolyn, at Moore Memorial Gardens cemetery in Arlington, Texas.