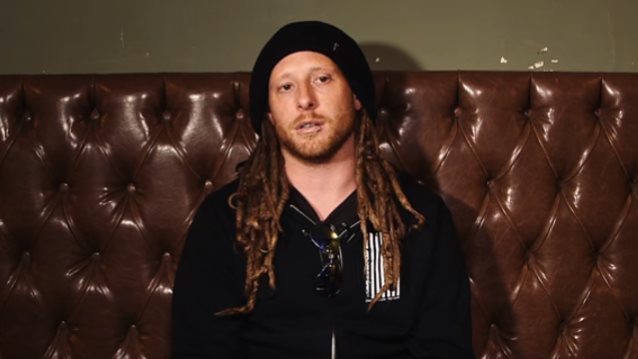 DEVILDRIVER Guitarist Had To Fight To Contribute To Songwriting Process

Fret12 recently conducted an interview with guitarist Mike Spreitzer of California's DEVILDRIVER as part of "The Sound And The Story" series. You can now watch the chat below.

Speaking about his songwriting contributions to DEVILDRIVER, Spreitzer said: "My influence with the band has been kind of a slow, steady process since I joined. Obviously, I wasn't on the first record [2003's 'Devildriver'], and then when we started doing 'The Fury Of Our Maker's Hand' [2005], I was the new guy, so I treaded lightly with the guys.

"When you join a band, it's like joining a new club — you've gotta work your way up the ranks; there's a pecking order. And I knew my place, but I was the only one that knew how to record, and so they needed me to record the demos, and that gave me a little bit of power. I ended up writing 'Hold Back The Day' — a lot of that song; John Boecklin [former DEVILDRIVER drummer] wrote a fair amount of it as well. But that became our first single off that record. So I started getting a lot of backing from people like Monte Conner at Roadrunner, telling the other guys to let me write a little bit more, even though — it's no secret — some of 'em really didn't want me to. And so I really had to kind of fight my way through the pecking order of the band to allow them to let me write. And with every record, it got a little bit easier."

He continued: "With [2016's] 'Trust No One', with the departure of John Boecklin, who was the main songwriter of the band… then he was out and that became me. I wanted to do the whole record by myself, maybe with some help from our producer, Mark Lewis, at first, but then I got introduced to Neal [Tiemann, guitar] and Austin [D'Amond, drums], and we clicked [snaps fingers] immediately."

Spreitzer also talked about the making of "Trust No One", which marked DEVILDRIVER's first release since the exit of Boecklin and guitarist Jeff Kendrick. He said: "To tell you the truth, the whole process is a bit of a blur. I had just moved out of my parents' house, and I was looking to buy a house. That didn't end up working out because [laughs] a girlfriend situation went south. And I ended up moving into my grandmother's old house, and I built a studio in the garage. I think it took me about sixteen months to build that thing. But it was just before the end of the record cycle, and I knew I needed to get it done before we started doing the record, 'cause I wanted to do the record there. And we did — I'm doing all the guitars and bass and pre-production there. So I did that, and then I started writing immediately, and between that, working for my dad and moving, that whole two years is just a bit of a blur."

Despite the fact that the "Trust No One" production process ended up being somewhat of a hectic affair, Spreitzer is proud of the final product. "For me, personally, it's the most important DEVILDRIVER record I've ever done — by far," he said.

"Trust No One" was released in May 2016 via Napalm Records. The follow-up to 2013's "Winter Kills" was once again produced by Mark Lewis (ARSIS, THE BLACK DAHLIA MURDER, WHITECHAPEL, DEVILDRIVER, DEICIDE, SIX FEET UNDER) with assistance from Jason Suecof (AUGUST BURNS RED, DEICIDE, DEATH ANGEL).