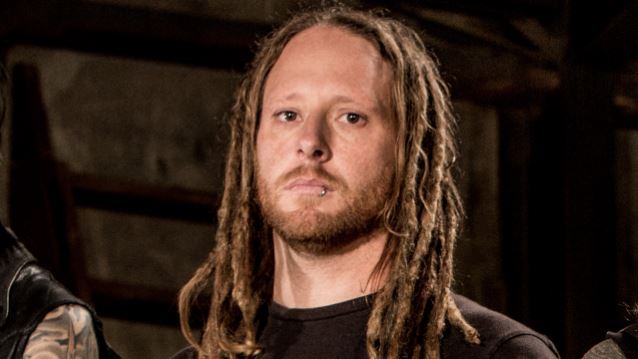 Sergio of Music Existence conducted an interview with DEVILDRIVER guitarist Mike Spreitzer prior to the band's October 18 show at the Culture Room in Fort Lauderdale, Florida as the support act for SUPERJOINT. You can watch the entire chat below. A few excerpts follow (transcribed by BLABBERMOUTH.NET).

Mike: "It's the first time, I think, we've ever put out a record where we actually are playing three songs. Not on this part, but on the first part of the tour when we were headlining, we were playing three new songs, which I don't think we've ever done before when we first had a record out. It could be a good sign of people liking the record. The record, to me, it seems kind of old. We do have another one coming out first quarter next year. It's a covers record. My part of the record, me and Neal [Tiemann, guitar] worked on it together. We did guitars and bass together. We re-wrote all of these outlaw country songs. It took about two months to get that done, then we did drums. It's getting mixed right now by [producer] Steve Evetts. I haven't heard any mixes yet, but it should be coming in pretty soon."

Mike: "We don't like being a metal band that covers metal songs. I think that's just silly. We've covered, we did 'Holier Than Thou' by METALLICA and we did 'Wasted Years' by IRON MAIDEN. I'm kind of indifferent about the songs. I'm not much of an IRON MAIDEN fan; I'm a huge METALLICA fan. There's a country band called 16 HORSEPOWER. We did a song called 'Black Soul Choir' by them on our album 'Beast'. That came out really cool. [DEVILDRIVER's rendition of] 'Sail', by AWOLNATION, it's kind of a bittersweet thing, it's become our most popular song. I guess people like things that are familiar. But we had a meeting in the back of the bus a few tours ago, the whole band. We sat down and made a list of twenty or thirty songs that we could possibly put on this next record. Then Neal and I just sat down and separately, just started re-writing them on our own. Then, we got together, did some final touches on them, then did the whole process over again with guitars and bass and finalizing everything. I think we did thirteen and we're going to release twelve. We got a lot of guests on it. Randy [Blythe] from LAMB OF GOD is one of them."

Mike: "I was a little reluctant to work with the new members at first. This is no secret, but Neal and Austin came over to my house and auditioned at my studio at the same time. Obviously, Austin couldn't bring a drum kit in there, so he just air-drummed everything, but I had seen enough videos online of him doing drum solos. He came really highly recommended by our producer, Mark Lewis. I trust Mark. If Mark said he could do it and he's an awesome dude, that's good enough for me. Neal came over and played 'Dead To Rights' for me, which is one of our harder songs to play. It took literally one day of us getting together, spending some time in the studio, writing and it was instant chemistry. It was good. And, it was a really fun record to write, 'Trust No One'. I had a lot of fun doing 'Outlaws Till The End' as well. They're just really good dudes. The old guys from DEVILDRIVER, too. I'm still really good friends with all of them. Chris [Towning, bass], 'Bubble' [Aaron Patrick, bass], [Jon] Miller [bass], [John] Boecklin [drums], [Jeff] Kendrick [guitar], all of them. Boecklin really wanted to do his own band and he's doing it right now. They're called BAD WOLVES. They've only played one show at the moment. They're up to something right now. I think they're recording. We should see something from them early next year as well. We all keep in contact. Jeff didn't want to tour anymore. He's since gotten more into the real estate game, but I still love touring, man. Dez [Fafara, vocals] was worried that I was getting ready to do something else. No. [Laughs] I very well might be a lifer. I like being on the road. I like touring. I like being in a different place every day. I kind of like the chaos of everything. It just suits my lifestyle, I guess."

On his approach to constructing both the outlaw country covers and recent DEVILDRIVER songs:

Mike: "The new record, there was writing, but there wasn't. We basically followed the structures of the songs. Sometimes we added some intros, added some outros, we added some solos in some places. Some songs actually don't sound anything like the original, except for the vocal content. When we started writing or re-writing, I should say, I had a tendency to stick more with the melodies of the actual song and Neal had a tendency to kind of go off to right field a little bit with his writing. We did 'Whiskey River' by Willie Nelson. There's not really a whole lot there. We had to get creative. 'Okay, what are we going to do to make it metal?' It was a cool process for me. Gutting all of these songs and looking at how they're structured made me realize that I had kind of gotten stuck in a rut as far as structuring the songs in some ways. I deliberately went out of my way to try to structure songs differently on 'Trust No One' here and there, especially on the opening track, 'Testimony Of Truth'. Doing this covers record has definitely taken it a little further. On the next record, you're going to see some different structures and things that might seem a little bit unorthodox to DEVILDRIVER. But, maybe people won't even notice. The listeners don't have a tendency to dissect the songs the way the writer does."

"Outlaws Till The End" is tentatively due in early 2018 and will feature appearances by nearly two dozen high-caliber guests, among them Glenn Danzig, Burton C. Bell (FEAR FACTORY) and guitarists John 5 (ROB ZOMBIE) and Mark Morton (LAMB OF GOD).