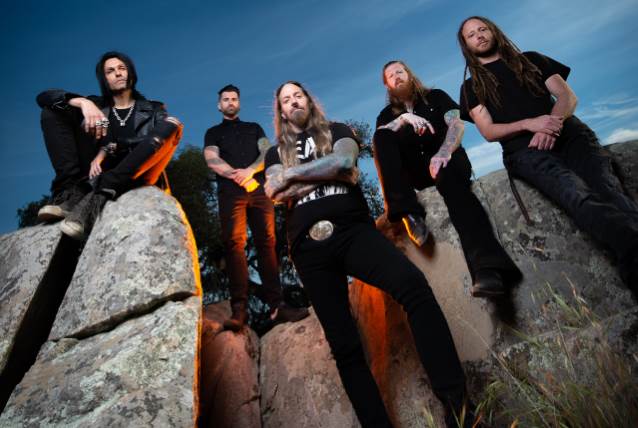 DEVILDRIVER's long-awaited full-length album of outlaw country-gone-metal anthems, "Outlaws 'Til The End: Vol. 1", will be released on July 6 via Napalm Records. The disc is described in a press release as "both a startling curveball and a ferocious statement of individuality from a band who have been a constant and effective force in the heavy metal world for the best part of two decades now."

After dropping its potent cover of outlaw classic "Ghost Riders In The Sky", DEVILDRIVER is following up with yet another track cut from "Outlaws 'Til The End: Vol. 1", a cover of Steve Earle's "Copperhead Road", featuring 36 CRAZYFISTS vocalist Brock Lindow. Check out a lyric video for the track beow.

DEVILDRIVER frontman Dez Fafara says, "I have always loved this story of running moonshine and running from the cops, and having Brock on this song was a smart move as his unique voice is absolutely perfect for it. I'm proud to have him on this record!"

Lindow adds: "I'm grateful to be included in the barnburner that is 'Outlaws 'Til The End: Vol. 1'! 'Copperhead Road' was always a heavy song with a great story that encompasses all things 'outlaw,' but DEVILDRIVER ups the ante on this one and puts the pedal to metal with their vision of the legendary jam. It was a tremendous honor to sing with Dez and the boys on this monster record!"

From the opening seconds of Hank 3's "Country Heroes" onward, "Outlaws 'Til The End" is simply one of the most invigorating records DEVILDRIVER has made so far. More importantly, these evocative, irresistible songs have all been wholly rebuilt from the ground up, powered by the classic DEVILDRIVER sound and embellished with Fafara's unmistakable feral roar.

"Outlaws 'Til The End" was produced, mixed and recorded with Steve Evetts (THE DILLINGER ESCAPE PLAN, EVERY TIME I DIE, SEPULTURA, THE CURE), with DEVILDRIVER guitarist Mike Sprietzer also lending recording talents. The album was mastered by renowned engineer Alan Douches.

"I knew right away that I wanted to have guests on this record, and the first guest I wanted was John Carter Cash," Fafara recalls. "I didn't want this thing to exist without John, without Hank 3 or without Randy. Basically, there were a certain amount of guests that I definitely wanted on it, but as I kept asking people, everyone kept saying yes!

"Randy and Mark are both from the country and they were immediately on board. With John, we wound up talking for two hours when we first met, all about his love of heavy metal and my love of outlaw country and my love of his dad's music. All he wanted to do was talk about metal and all I wanted to do was talk about outlaw country. It was the craziest thing."

Not only just content with a collaboration with John Carter Cash, the album also features the iconic voice of FEAR, U.S. punk rock legend Lee Ving. "Lee has a country band called RANGE WAR and when he first started in music, his mother gave him her mandolin to play, so he played country music before he ever did punk rock," Fafara notes. "I've been fortunate enough in my career to do songs with Ozzy [Osbourne] and some of the greats, but doing a song with Lee Ving? What can I say… he's my ultimate hero in life. I had a FEAR shirt on the first time I ran away from home, you know?"

"Outlaws 'Til The End" track listing:

06. "If Drinking Don't Kill Me (Her Memory Will)"
Written by Harlan Sanders, Rick Beresford; recorded by George Jones
Performed by Wednesday 13 & Dez Fafara

07. "The Man Comes Around"
Written by Johnny Cash
Performed by Lee Ving of FEAR & Dez Fafara