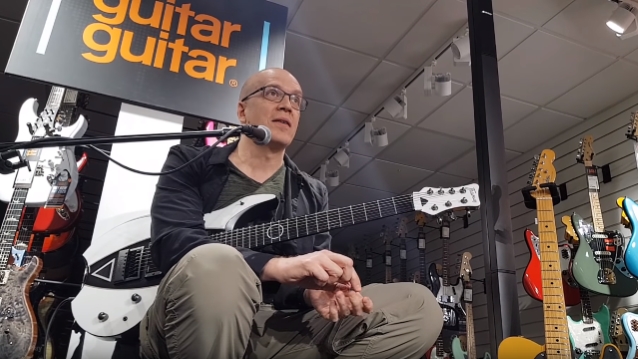 DEVIN TOWNSEND On NICKELBACK's CHAD KROEGER: 'I Feel Like I Owe Him A Real Debt Of Gratitude'

Devin Townsend says that he owes Chad Kroeger "a real debt of gratitude" for giving him invaluable career advice.

During a London clinic earlier this month, Townsend spoke in more detail about how Chad ended up guesting on his new LP, which is scheduled to arrive on March 29 via InsideOut Music.

"I was super critical of the band," Townsend continued. "I was, like, 'Fuck that band! Blah blah blah It's disingenuous. It's this and that and the other thing.' Then I heard one of their songs last year. And a bunch of my friends worked with it. So I wrote on Twitter, 'I like the new NICKELBACK song.' Because I thought it was cool. And the ensuing shitstorm that came down my neck was insane. 'Fuck you! I will never fucking listen [to your music]. How dare you like something I don't like?' So the next day I got a text from Chad. And I'd never talked to the guy before. And he was, like, 'Thanks for not talking shit about me. That was cool.' And I said, 'Just to be clear, I have — for sure.' And I said, 'I've analyzed my feelings on that. And because we have mutual friends, I heard you had talked shit about me.' And I was also jealous, I think, on some level, because that's what you do in Canada. If someone has success, you cannot be happy for them. You just have to be, like, 'Well, he clearly sucks cocks in hell.' So it was cool. It was a nice little interaction. And I said, 'When I'm back in Vancouver, if you're free, we'll just get a coffee.' And so I got back and gave him a call. And he said, 'Well, why don't you come over?' And I said, 'Yeah, sure.' The dude's got a lot of money — no lie. I remember pulling up and just being, like, 'Oh.'

"So, anyway, I went in and we found out we got along well," Devin said. "And it was interesting to me as well, because his level of success was such that he's done all these things that I've never done. And in my career, I've done some cool stuff. You do some festivals, you get to play an arena every now and then. But there's no handbook for that. So if you have questions about it, if it emotionally affects you in a way that is confusing, there's no one to talk to about it. 'Cause a lot of times people interpret that as bragging. Like if you go up to somebody, like a buddy across the street who works at the gravel pit, and [you say], 'We played this really good show. And people were staring at me. It was so weird.' And he's, like, 'Why don't you just shut the fuck up?' But this was a really interesting for me, because I was able to say, 'I'm confused about this.' He's, like, 'Oh, it's this and it's this.' And I was, like, 'Oh, that's actually really interesting. I've never had it laid out that way.'"

Townsend went on to say: "Full disclosure: I'm 46 years old, and prog metal is not a particularly lucrative genre. So every month that goes by, there's money things. The kid needs braces, or there's insurance on the gear, and it's expensive. So last year, when I quit DTP [DEVIN TOWNSEND PROJECT], there was a part of me that was, like, 'Maybe I should just make a pop record.' Honestly! I was, like, 'Maybe I should just put together a couple of choruses. I know that there's six hundred to twelve hundred kids a night, or people a night, who will maybe buy that, and it will kind of be like OCEAN MACHINE except for the bigger kick drum or something. We'll start with the chorus and maybe we can make it three and a half minutes long. And we'll make it about positive thinking, because that way I know it's a sellable market. So when I was with Chad, I said that — I said, 'I'm tired, man. I've been doing this for-fucking-ever. And we're still [living] month to month. Would you help me produce — 'cause we get long — a commercial record?' And he was, like, 'I'll tell you what you need to do. You need to get over this fear. You need to make exactly what it is that you need to do. You need to make uncompromising music. And you need to turn your vocals up.' It was crazy. He was the one that convinced me to make this, in a lot of ways. And it was such a profound experience for me, in a way, because I wouldn't have expected that. He was, like, 'The reason why I do the music that I do is because this is who I am. And people may not like that, but this is how it comes out for me.' And then watching him, 'cause at the time, he was playing his demos for his new record, and he was super into it. It wasn't like, 'Oh, I've got this thing, and I'm gonna pull the wool over everybody's eyes.' It's, like, he had broken up with his wife, and he's, like, 'This is a song…' And I was just, like, 'You do the same thing I do. It's just what you do results in something that a lot of people have problems with.' But also, it doesn't mean that he's not being genuine. And in the same way, I realized from that meeting, that I need to do the same thing in a way. But what happens when I do that is this gong show that you're about to hear in a couple of months [when 'Empath' is released]. But it was really an important thing for me to hear that from somebody, and specifically from somebody [people have] so much hate for. He was, like, 'People fucking hate me, man. And this is my advice to you. You're not supposed to make pop music. You're supposed to do that. If you make pop music, that's being disingenuous in a lot of ways.' And it was so intense for me, in a way.

"Had I not had that experience with him, I think I would have been tempted to make something that would have, in a sense, gone in direct opposition to the thing that I've done for years that has allowed people to be so supportive," Devin said. "So I feel like I owe him a real debt of gratitude in a weird way."

According to Devin, Chad appears on "Empath" in a way that will be surprising to listeners of both artists.

"He sings a harmony on a song that is death metal," Townsend said. "It's just brutal fucking music — it's brutal. It's seven minutes of 32nd note kick drums. It's just artillery fire. And then all of a sudden, there's Chad. But it's a harmony. It's hidden… it's not hidden in the music, but it helps the music. It's a cool thing."