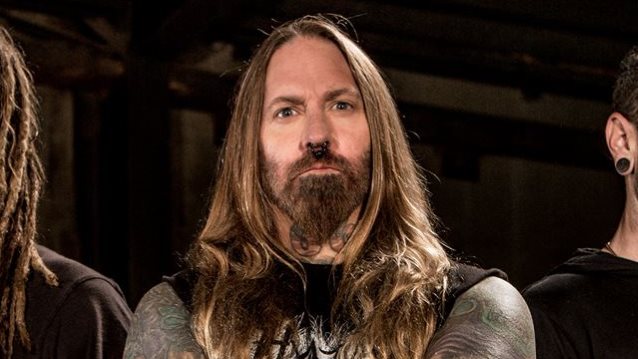 DEZ FAFARA: 'COAL CHAMBER Has No Place In My Life Whatsoever At This Point'

Brendan Crabb of Australia's Blunt magazine recently conducted an interview with DEVILDRIVER and COAL CHAMBER frontman Dez Fafara. An excerpt from the chat follows below.

Blunt: There was conjecture among some more grizzled metal fans who bemoaned you making an album ("Rivals") with the much-loved, but also oft-maligned COAL CHAMBER during DEVILDRIVER's downtime between "Winter Kills" and "Trust No One". One school of thought was that you'd spent more than a decade building DEVILDRIVER and establishing credibility there, only to take what some perceived as a step back by embracing COAL CHAMBER again. Were you aware of that sentiment?

Dez: Every band's got its criticism. COAL CHAMBER toured the world with PANTERA and BLACK SABBATH, and had gold records. It seemed to me that a lot of people loved that band, and we left at the height of where we were at. We had a massive draw, we were a massive presence all over radio. It's just that inward, all the members had problems that I didn't want to deal with any more, so I left. As far as credibility, I mean, every band has got its critics, right? So that's all good with me. As long as you're doing something real and to the point. And the thing is this; I took time off from DEVILDRIVER not to do COAL CHAMBER. I took time off completely, just to take time off. When I took time off, the COAL CHAMBER guys called me and said, "Look, what's your most important thing?" I said, "I want to eat dinner with my family every night." They said, "Well, you have a studio at your house. Why don't you record a record?" I said, "Cool. Okay. I'm just sitting home anyways." I'm not a guy who watches TV. Sure, I'll make a record and have a good time doing it. Then they were, like, "Do you want to do some small amount of touring?" Which we did. It was quite the opposite way around. I took time off and COAL CHAMBER came to me… It's kind of on the bucket list. I left that band at the height of everything on [2002's] "Dark Days", and it was, like, I would love to record something new with them. I don't know if you were at that Soundwave show when COAL CHAMBER played, but every single audience member was singing the words as loud as possible. I could have just stopped singing, basically. So that'll tell you where the fanbase was at. And as far as critical, well, some people say he took a step back. How do you take a step back into a band that made you who you were? A band that gave you gold records, took you around the world, did songs with Ozzy. So I never understood that. And there's probably a million-plus people in the world that would love to have that opportunity to take that "step back." [Laughs] The Internet wizards sitting behind keys. [Laughs]

Dez: COAL CHAMBER right now, COAL CHAMBER has no place in my life whatsoever at this point. Not with DEVILDRIVER firing on all cylinders and where we're at. I'm telling you, if you've heard "Trust No One", the next subsequent records after this are going to be fucking furious. We've kept our signature groove, but we've also jumped way away from any people around us. So we're really defining ourselves at this point, and stepping completely away from the pack.

Read the entire interview at Blunt.