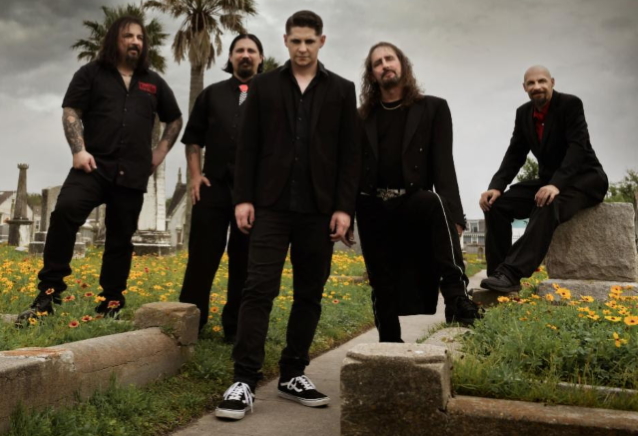 DIEHUMANE was founded in Galveston, Texas at the end of 2020 by Vargas and Hilligiest as a way to deal with the loss and isolation of that year. From there it snowballed into something massive, with West, Hunolt and Abruscato all joining the fold.

DIEHUMANE is a band that swims about as far away from the other fish as it gets. It combines elements of doom metal, jazz, industrial, blues and prog. Imagine if CELTIC FROST got into a car crash with A PERFECT CIRCLE, NINE INCH NAILS and TYPE O NEGATIVE while listening to PINK FLOYD on the radio. DIEHUMANE is heavily rooted in mood and atmosphere, from the brooding to the cathartic, from the hopeless to hopeful. Love them or hate them, it's a musical ride that you can only get from them.

Said Fafara: "We here at Oracle Management are very proud to announce that DIEHUMANE has chosen to allow us to represent them. The music belongs in its own category being artistic, heavy, and unique in its own right. There's seasoned musicians at the helm and one of the best vocalists I've heard in many years. Here's to the future!"

Said Hunolt: "To be honest, being in a band wasn't even on my mind at the time a dear friend called me and said, 'Hey, I know these guys looking for a guitar player.' He sent me some raw tracks, and I listened for about a month before I replied, and it was the music that I was looking for. It gave me the ability to express myself musically and, even more important, was radically different than anything I have ever played. Music needs 'different' in order to evolve. [There's] so much talent in this band, and I can't wait for you to experience DIEHUMANE."

Added Abruscato: "I am looking forward to the release of this very different and unique album I had the pleasure writing/performing the drum tracks for. It's different from what I have done in the past and it's been fantastic to be a part of it with everyone in the band, Ulrich Wild/WURMgroup and The Oracle Management. I feel folks will be blown away."

Stated West: "I grew up listening to Sal and Rick. Then Dez took us into his flock with The Oracle and Ulrich (a powerhouse responsible for many of my favorite records) made it his mission to make us sound pristine. What we have here is something special. I just hope people find it as special as we do."

Said Hilligiest: "I want to thank Ulrich and Dez both for taking interest in us and helping us get it out there. I'm just happy to finally get it out to people's ears. We've been hearing this album in many different forms for two years now, it's time to let everybody else in the world hear it as it is meant to be heard. I hope you all like it as much as we do."

Commented Vargas: "Typically the formation of a project and subsequent creation of an album marks the beginning of something, whereas this one starts with the end, and actually ends with the beginning of something. All of these songs began as a way of dealing with complete and total isolation in 2020 and the loss of what life was before that year, and ends marking the beginning of something awesome, and the album sounds like exactly that. Recording began in a dingy townhome in Galveston, Texas and ended in fucking Hollywood. The musical journey we all took on this album is something I wouldn't trade for world. Big thanks to Ulrich Wild (WURMgroup) and Dez Fafara (The Oracle Management) for going on this crazy journey with us. I'm so happy with this album that I don't even care if anyone hates it."

Rick discussed his exit from EXODUS during a November 2021 appearance on "Put Up Your Dukes", the podcast hosted by ex-EXODUS singer Rob Dukes. He said: "During the recording of 'Tempo', Gary [Holt, EXODUS guitarist] had just gotten clean a little while prior to that, and I was still using. But I've gotta say, Gary Holt — my hat's off to the man for… He never sweated me. Not once did Gary say, 'Dude, you're a piece of shit. I'm gonna fire you from the band if you don't get your shit together.' He never said nothing. He let it take its course, you know what I mean?