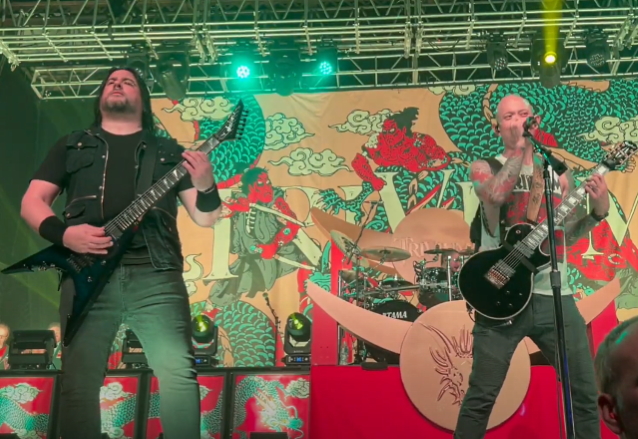 TRIVIUM guitarist Corey Beaulieu spoke to Radioactive MikeZ, host of the 96.7 KCAL-FM program "Wired In The Empire", about his band's recent U.S. arena shows as the support act for IRON MAIDEN. He said (as transcribed by BLABBERMOUTH.NET): "When any of your favorite bands wanna call you up for support, it's a great honor. It'd have to take something pretty extreme to have to say 'no' to the opportunity. We've done Europe with them back in 2006, which was amazing. And to be able to tour with them all these years again is amazing; they're still one of the kings. So it's great.

"We did two tours with MEGADETH, and after we did the first tour with MEGADETH, we did a show with METALLICA in Florida, and then another tour with MEGADETH and then IRON MAIDEN," he continued. "So it's always awesome when your favorite bands want you to warm the show up for 'em. It's always a great honor. And hopefully that won't be the last time we play with MAIDEN. We always love the opportunity. They always treat us great. The shows have been awesome. The MAIDEN crowd was very welcoming to us, so we were very happy to be on those dates."

Asked if he and his TRIVIUM bandmates got to hang out with the MAIDEN guys at all this time around, Corey said: "We've seen those guys. Their travel schedule is way different than ours. They'd show up, play and then take off right after their set. But I think the second show we played with them, a bunch of the guys came into our dressing room and said hi and [said they were] happy to have us on the tour. We saw Nicko [McBrain, MAIDEN drummer] quite a bit; he was always kind of roaming around before the show or at catering and stuff. So we saw him a lot. Steve [Harris, MAIDEN bassist] would pop in and say 'hey.' And Bruce [Dickinson, MAIDEN signer] and those guys, [we saw them] very briefly, 'cause they pretty much showed up right before they played and were getting ready. So there wasn't really too much time [for us to hang out with them]. But we got to watch the show."

Corey added: "I really wish they would give us a call [to support them on their next tour]… My favorite MAIDEN record is 'Somewhere In Time', so now they're finally playing a bunch of [those songs] on their next tour. That'd be a call I would definitely be happy to get. But the set they were doing this time, I really like it when they play Blaze Bayley-era songs with Bruce 'cause I feel like there's a lot of stuff on those records that just because Bruce wasn't on it kind of gets massively overlooked [even though they're] really good tunes. So it's always nice to hear them play those and see the crowds really appreciate those songs. 'Cause I know a lot of people that are MAIDEN fans that kind of just blow those records off as, like, not even bother. But those records came out when I was just getting into MAIDEN so I kind of have probably more of a softer spot for those records 'cause I really liked them… I always tell people, 'Hey, when you hear Bruce singing it, it sounds like a classic MAIDEN song.' The songs are really good; it's just [that] people didn't really give 'em a chance 'cause there was a different singer, but when you hear Bruce singing 'em, it sounds like it could have came off of a classic '80s record."

TRIVIUM's latest album, "In The Court Of The Dragon", was released in October 2021 via the band's longtime label Roadrunner Records. The record was produced and mixed by Josh Wilbur and recorded in the fall of 2020 at Full Sail University in Orlando. The album cover is an original oil painting by French artist Mathieu Nozieres.