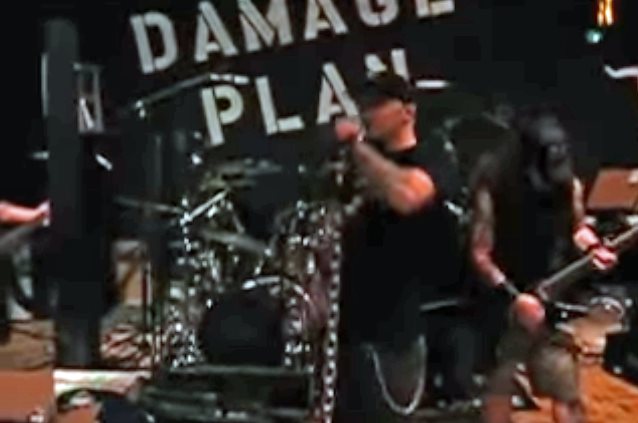 Vinnie Paul Abbott recently said that DAMAGEPLAN would have been in it for the long haul had the band's guitarist "Dimebag" Darrell Abbott not been murdered exactly twelve years ago today.

Dimebag was co-founder and lead guitarist for PANTERA. When PANTERA broke up in 2003, Dimebag and his brother Vinnie Paul formed DAMAGEPLAN. On December 8, 2004, while performing with DAMAGEPLAN at the Alrosa Villa in Columbus, Ohio, Dimebag was shot and killed onstage by Nathan Gale. He was 38 years old.

During an appearance on "Trunk Nation", Eddie Trunk's new show on SiriusXM channel Volume (106),Vinnie Paul was asked if he thought DAMAGEPLAN would have been around for years to come if Dimebag's life hadn't been cut short. He responded: "I do. We were hurt. We didn't know what happened with PANTERA. It wasn't an official breakup; there wasn't anything where we said, 'Well, that's it. We're done.' It's just…. They [vocalist Philip Anselmo and bassist Rex Brown] just quit taking phone calls and [were] off doing their own thing, and so we felt like it was time for us to move on and do our thing."

He continued: "The first [DAMAGEPLAN] record, I think, was pretty diverse. We wanted to do something that didn't sound exactly like PANTERA, and with [the material that was written for] the second record, it was really focused, man. I've got the demos and some day they'll come out. But I really feel like we had turned a corner. We'd been out, the fans had seen us, and they'd accepted the fact that this was our new thing at this point."

According to Vinnie, touring with DAMAGEPLAN was a humbling experience after spending several years playing in mostly arenas with PANTERA.

"You don't get anything easy when you come from a big band and you go and start another one," he said. "You learn real fast that, 'Wow! I went from the top of the mountain to all the way back to the bottom, and I've gotta start over.'"

Since his brother's murder, Vinnie Paul has released several Dimebag-related items through his Big Vin Records label, including DVDs and the paperback book "He Came to Rock". Vinnie later said that the Dimebag-related releases weren't an attempt to cash in on his brother's tragic end but rather a way to keep Dimebag's legacy alive and well.

"It's sad to say, but you just get larger than life when you're gone," Vinnie told "Trunk Nation". "It's just really weird. I really appreciate it, man. The fans have kept his legacy and everything he's done intact and alive, and it's just constantly growing, man. His legend's huge."

DAMAGEPLAN — whose lineup was completed by singer Patrick Lachman and bassist Bob Zilla — released its debut album, "New Found Power", in February of 2004. The group was touring in support of the record at the time of the shootings.