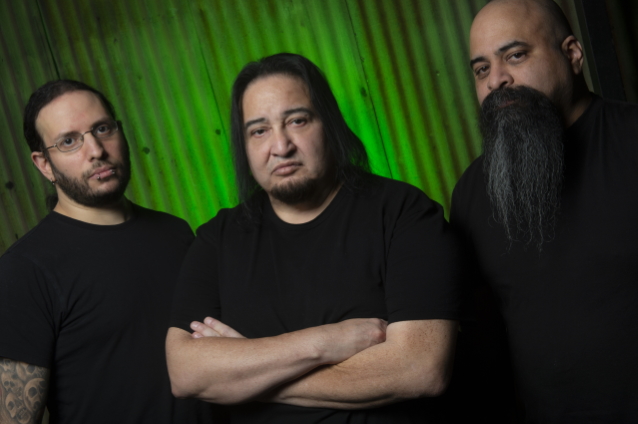 DINO CAZARES Is Days Away From Deciding On New Singer For FEAR FACTORY: 'I've Found Some Really Good Talent'

This past Friday (April 16),FEAR FACTORY released its first new song in over five years, "Disruptor". The track will appear on the band's upcoming album, "Aggression Continuum", due on June 18 via Nuclear Blast Records.

In a new interview with Temple Of Bleh, Cazares revealed that FEAR FACTORY has not yet found a replacement for Bell. "We're at the point where I'm gonna decide on a singer any day now," he said (as transcribed by BLABBERMOUTH.NET). "There's multiple people that are really good — really good. Even some females that are really good. And making a decision is gonna be definitely tough. 'Will the fans accept them? Will the fans not accept them?' — that kind of thing. I worry about all those kinds of things, but at the same time, I've gotta be how I was in the beginning and not fear — not fear change. I necessarily don't fear change, but I do take it into consideration how fans are gonna take it. I mean, I can't base everything I do on what a fan might think, because then I'll never get anything done. But it is definitely a big decision. And whoever I choose, I want them there to be for the long run, because I plan on making a few more records before I'm retired or gone or whatever. It's definitely a big decision. And it's some big shoes to fill."

Dino continued: "I wanna get back to playing songs that we never got to play live. It's no secret that Burt had some vocal issues when he sang live — he just couldn't sing certain songs. It just happens. Like 'Linchpin', our biggest song, we could never play it. I wanna be able to find a singer that can sing that song and we can play it live every night. I wanna be able to give people the hits — the songs that they paid money to see."

Cazares went on to say that he is confident that he will pick the right person for the job. "I was able to find a couple of very talented guys for DIVINE HERESY [Dino's other band], who went on to do big things," he said. "Some of 'em went on to do big things and caused big things. [Chuckles] So I'm hoping that — well, I actually know that I've found some other really good talent. Now it's just a fact of getting in a room with these guys. Before I make a decision, I want these guys to come down here, spend some time with us, see if I like them, see if we can get along, see if they're gonna be too nervous on stage or singing in front of us. Blah blah blah blah blah. That kind of stuff."

Last September, Bellissued a statement officially announcing his departure from FEAR FACTORY, saying that he "cannot align" himself with someone whom he does not trust or respect. He also ruled out a possible reconciliation with Cazares down the line, saying: "I'm done. I haven't spoken to Dino in three years. I haven't spoken to Raymond [Herrera, former drummer] and Christian [Olde Wolbers, former bassist] in longer than that, and I have no intention to. I'm just moving forward with my life."

FEAR FACTORY has been out of the public eye since it completed a 2016 U.S. headlining tour on which it performed its classic second album, "Demanufacture", in its entirety.