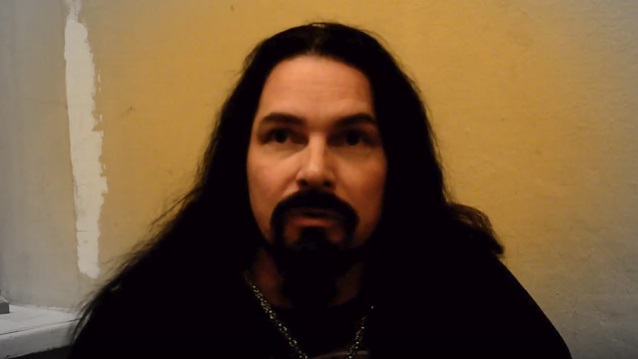 DIO DISCIPLES bassist Bjorn Englen has defended the band's decision to go on the road with a hologram of Ronnie James Dio, saying that a lot of the tour's critics would change their minds if they experienced the live show in person.

For the past several years, the ex-YNGWIE MALMSTEEN bassist has played sporadic shows with DIO DISCIPLES, which is made up of former members of DIO, along with a rotating lineup of vocalists, including ex-JUDAS PRIEST singer Tim "Ripper" Owens and LYNCH MOB frontman Oni Logan.

Billed as a "celebration of the music and legacy of the greatest singer in the world, Ronnie James Dio," DIO DISCIPLES recently kicked off a world tour during which it is fronted by Ronnie's hologram for select songs.

Based on video footage of the first several shows, Dio fans had mixed reactions to the apparition of their favorite singer, with some loving it and others thinking the performance didn't live up to the real thing or was just plain creepy.

Prior to the third concert of the "Dio Returns: The World Tour", which took place on December 9 in Warsaw, Poland, Englen told RockOtheque about the criticism of the Dio hologram (see video below): "Well, I wouldn't recommend anybody to look at [the hologram] and compare it to the real thing. 'Cause, obviously, [Ronnie is] not here with us anymore, and the hologram, obviously, is a technical thing — it's been technically created. So I would advise people to not look at it that way and to look at it as a form of presentation of the music with a live band. And the fact that we're doing most of the songs without the hologram in the show, with the normal DIO DISCIPLES band, I think that people shouldn't be so quick in criticizing it. And I think also a lot of people, once they see it and once they experience the whole show, they'll change their minds. Now the problem is seeing it on YouTube and seeing it in real life is a different thing."

The production uses audio of Ronnie's live performances from throughout his career, with the DIO band playing live, consisting of Craig Goldy on guitar, Simon Wright on drums and Scott Warren on keyboards, along with Englen on bass.

Asked if he thinks hologram performances will become more common in the future, especially with so many legendary artists dying in recent months, Englen said: "Oh, yeah. It's inevitable. I don't see why it wouldn't. 'Cause if you have, say, for example, Tom Petty, you still have [his backing band] THE HEARTBREAKERS, and if they wanna do that, I think you get as close as you possibly can to the real thing. Now if you get random musicians that never worked with the artist before, then that can be debateable, maybe. But I think it's great if people wanna see it. And in our case, it's live vocals of Ronnie's that we're playing to, so that alone, I think, makes a difference, as opposed to having studio recordings. There's a lot of things that I think people don't necessarily know when they criticize it. I think a lot of artists are gonna be doing it, and a lot are already talking about it and stuff like that. So it's definitely gonna be a big thing in the future."

Owens said in a recent interview that Ronnie James Dio's widow/manager Wendy, who is also a member of the Eyellusion team, "spent a fortune" creating the Ronnie James Dio hologram and ultimately just "wants to please the fans."

"Dio Returns: The World Tour" will hit the Netherlands and Belgium before the end of 2017. In 2018, the trek will make stops throughout Scandinavia, Argentina, Australia, Brazil, Canada, Chile, Colombia, Ecuador, France, Germany, Japan, Mexico, New Zealand, United States, Venezuela and other countries, with many more dates to be announced.