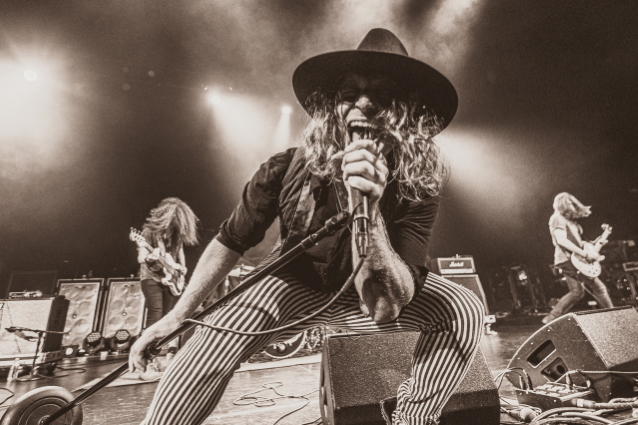 DIRTY HONEY To Record New Music In The Spring

DIRTY HONEY, the hotly buzzed band that is giving the Millennials and Gen Z what they've been starved for — high-energy, sexy, gritty, and unapologetically-loud-AF rock'n'roll — will head to Byron Bay, Australia in early spring to record new music with producer Nick DiDia (RAGE AGAINST THE MACHINE, PEARL JAM) who produced the band's self-titled EP. This announcement is made as the band's second single, "Rolling 7's", blasts into the Top 10 at Active Rock Radio at No. 9, following in the footsteps of DIRTY HONEY's debut single, "When I'm Gone", that made record business history last fall when it went to #1 on Billboard's Mainstream Rock Chart, the first time in the chart's 40-year history that an unsigned band's single went to the top of that chart.

In other news, DIRTY HONEY has announced a series of new dates added to its "Rolling 7's" 2020 U.S. tour, as well as its first-ever concerts to be played in Australia and Japan. The itinerary includes headline shows, appearances at major music festivals, including Sonic Temple, Rocklahoma, Download festival in Tokyo, and the Beale Street Music Festival, as well as several major rock radio station-sponsored festivals.

DIRTY HONEY has played to SRO crowds on all "Rolling 7's" headline dates, and the band's upcoming, confirmed 2020 itinerary is listed below. "Rolling 7's Tour" VIP packages and ticket pre-sales begin this Thursday, February 20 at 10 a.m. (local),and the public on-sale starts Friday, February 21 at 10 a.m. (local). Log on to www.dirtyhoney.com for all ticketing and VIP packages details.

DIRTY HONEY — Marc LaBelle (vocals),John Notto (guitar),Justin Smolian (bass) and Corey Coverstone (drums) — kicked off 2020 with a Best New Alt/Artist nomination for the upcoming 2020 iHeart Radio Music Awards, being named on Revolver's Fan Poll as one of the "5 Bands Likely to Break Out in 2020," recognized as Canadian rock radio's Mo. 1 International Breakout Artist for 2019, and has accumulated more than 16 million total streams.