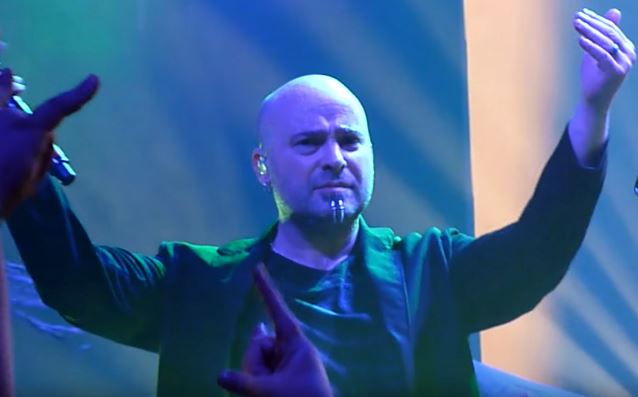 DISTURBED Frontman Calls Out Fan For Texting During Concert: 'Are We That Boring?'

A woman was called out publicly by DISTURBED frontman David Draiman when she decided to text rather continuously during the band's March 23 concert in Dallas, Texas.

The scolding was captured on video shot at DISTURBED's performance at House Of Blues, and the clip is now beginning to make the rounds.

In the video, which can be seen below, Draiman can be heard addressing a specific segment of the audience. He said: "Oh, up in the balcony, what am I gonna do with you? Especially this one. Yeah, you, the brunette. Yeah. Hi, how are you? So what is so important going on in the world that you need to be texting the entire fucking show? The whole show! You're right up front; I can see you clear as day. You've had your face in your fucking phone the whole goddamn show. Are we that boring?"

After pausing for a second, he continued: "Don't tell me to go fuck myself; you already did by looking in your phone instead of paying attention.

"I'm not wrong. Am I wrong? If you were up here and I did that to you, how would you feel? Seriously! It's fucking rude. It is!

"If you don't wanna watch, don't watch, but don't stand there in front of the fucking stage in the front row of the balcony where everybody can see you texting the whole fucking time on your phone."

The singer then added: "I'll tell you what. Can I at least have your word that I will have your attention for the rest of whatever's left of the set?

"Now she's all pissed off. She thinks that I did something wrong to her. I love it.

"Welcome to the age of the Internet, ladies and fucking gentlemen."

"Immortalized", DISTURBED's sixth studio album, was released last August and debuted at the top of The Billboard 200 chart. That made it DISTURBED's fifth effort in a row to enter the chart at No. 1, a feat shared only with METALLICA and DAVE MATTHEWS BAND.