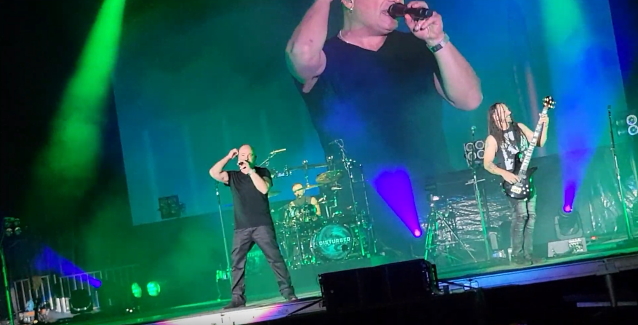 DISTURBED performed live for the first time in nearly two years last night (Saturday, September 25) as one of the headliners of the Louder Than Life festival in Louisville, Kentucky.

After the show, DISTURBED guitarist Dan Donegan took to his Instagram to share a backstage photo of him with his bandmates, and he wrote in an accompanying message: "I'm so grateful for this opportunity to come back and perform again for all of you disturbed ones after being away for two years! Thank you @louderthanlifefest @dannywimmer for giving us back what we all need! I'm still on a high from the adrenaline that I can't sleep! Hope to see you again in Nov. Much Love & respect @disturbed #areyouready #theinfectionmustdie #downwiththesickness #indestructible #holdontomemories #louderthanlifefestival".

DISTURBED's setlist was as follows:

"The Sickness 20th Anniversary Tour" was supposed to celebrate the 20th anniversary of DISTURBED's seminal album "The Sickness". On this tour, the band was expected to perform songs off the album, as well as tracks from DISTURBED's latest album, "Evolution", and its extensive catalog.

In September 2020, DISTURBED's "No More" landed at position No. 1 on Billboard's Mainstream Rock Songs airplay chart. The track, which was the third single from "Evolution", marked DISTURBED's seventh straight No. 1 on the chart.