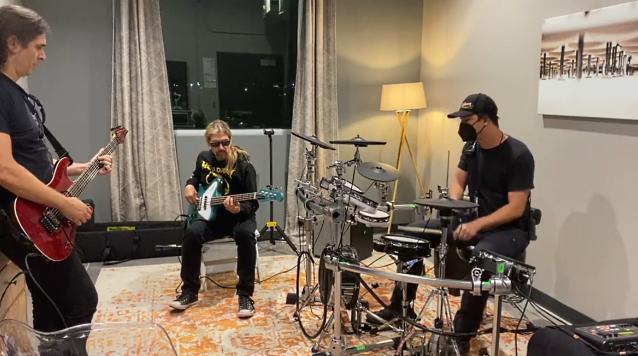 MEGADETH guitarist Kiko Loureiro has uploaded a video of him jamming backstage at a recent stop on "The Metal Tour Of The Year" with the band's touring bassist James LoMenzo as well as MEGADETH's production assistant (and MIND FLOW drummer) Rafael Pensado. Kiko wrote in an accompanying message: "Backstage Moments. This is what we do just before getting on stage @bassmonsterr bass @rafaelpensado drums".

Rounding out the lineup for "The Metal Tour Of The Year" are LAMB OF GOD, TRIVIUM and HATEBREED. Produced by Live Nation, the rescheduled trek kicked off on August 20 in Austin, Texas and will conclude on September 28 in Minneapolis, Minnesota.

Dave Mustaine has yet to reveal who played bass on the new MEGADETH album after Ellefson's tracks were removed from the LP following his dismissal from the band in late May.