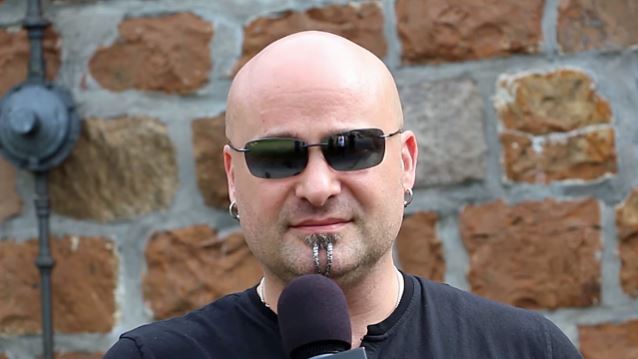 DISTURBED Singer: 'We're Performing At A Level That Is Unprecedented In Our Careers'

Fight+Music conducted an interview with DISTURBED frontman David Draiman at this year's Heavy Montreal festival, which was held August 6-7 at Parc Jean-Drapeau in Montreal, Quebec, Canada. You can now watch the chat below.

Speaking about DISTURBED's comeback after going on a four-year hiatus in 2011, Draiman said: "It's been amazing. The fire has been stoked. We're performing at a level that I personally believe is unprecedented in our careers. The crowds have been amazing, huge. We've really been overwhelmed throughout the duration of this cycle with the amount of success that we've seen. We're very, very grateful."

DISTURBED version of "The Sound Of Silence" has been a huge hit for the band, with Paul Simon sharing his approval of it publicly after watching the band perform the song on "Conan" and also exchanging e-mails with Draiman.

DISTURBED's record label, Warner Bros., credited the song's popularity to the video for "Silence", which was released in December 2015. To date, the clip has been seen more than 95 million times, a record number of views on YouTube for the group.

"The Sound Of Silence" is taken from DISTURBED's sixth studio album, "Immortalized", which was released in August 2015.