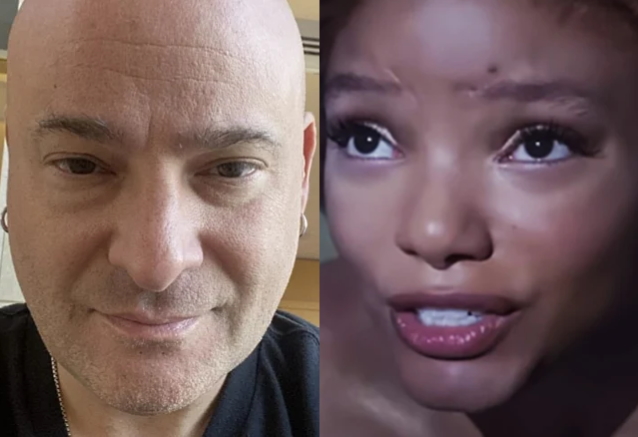 DISTURBED's David Draiman has weighed in on the racist backlash to the recently released trailer for Disney's live-action version of "The Little Mermaid".

In a tweet earlier today, the singer blasted online complaints about the fact that the film stars a black actress, Halle Bailey. In the original animated film, released in 1989, Ariel, a fictional mermaid, is depicted as a white, red-haired woman. He wrote: "If you have a problem with someone dark skinned playing the role of a fantasy creature like Ariel the mermaid, you're not really worried about 'keeping true to the original story', you're just being a bigot."

Walt Disney Studios posted the trailer to its YouTube channel last week and it quickly racked up millions of views, but the company was forced to disable the dislike button after receiving 1.5 million thumbs-downs in just two days. Most of the backlash, which first surfaced in 2019 following news of Bailey's casting, appears to be from people who think Disney is "too woke" for making the film's title character black.

"The Little Mermaid" will mark the first starring role in a feature film for Bailey, who is widely known as half of the Grammy-nominated sibling duo CHLOE X HALLE.

On the red carpet for Disney's D23 event last Friday, where "The Little Mermaid" trailer was first shared, Bailey told The Hollywood Reporter that the most magical part of the experience for her was knowing that "somebody like me" is getting this opportunity. "The fact that I get to represent all of these little young black and brown boys and girls who are to come is really special to me because I know that if I had that when I was younger, it would have changed my whole perspective on life."

Rob Marshall, who directed the new "The Little Mermaid", said that the live action remake will "honor the original" animated film but that he wanted to "bring some depth" to the reimagined story.

"The Little Mermaid" was originally slated for release in November 2019. However, due to the pandemic, the production was pushed back and it is now set to be released on May 26, 2023.

If you have a problem with someone dark skinned playing the role of a fantasy creature like Ariel the mermaid, you’re not really worried about “keeping true to the original story”, you’re just being a bigot. #TheLittleMermaid#TheLittleMermaid2023