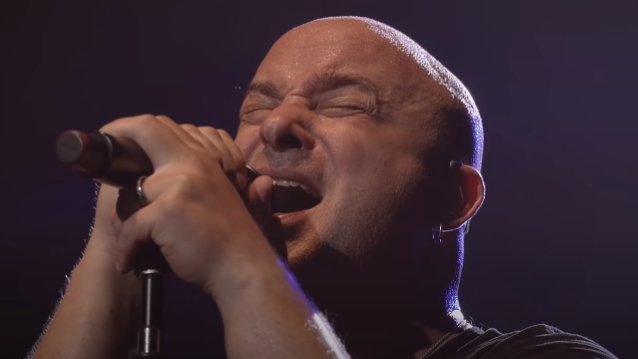 Last fall, DISTURBED shared a poll on U.S. music industry publication Billboard's web site that asked who should sing the anthem before the 2020 Super Bowl and encouraged the band's fans to write vocalist David Draiman's name into the poll. Asked in a new interview with "Whiplash", the KLOS radio show hosted by Full Metal Jackie, what makes that song an appealing challenge for a singer, Draiman said (hear audio below): "They say that it's one of the more difficult songs to pull off, first of all. Second of all, it's our national anthem, and I would be overwhelmed with honor and joy to be able to have that distinction and an honor of singing it. It's one of those bucket-list items that I've just been dying to do my whole life. Hopefully one day. You never know."

Draiman previously told Loudwire that he has "dreamt" of singing "The Star-Spangled Banner" in front of the Super Bowl crowd and to an estimated TV audience of about 100 million people his "entire life." He added: "[I've] been rehearsing it since I was a little boy. I love my country, and I would be honored beyond words to have the opportunity to try and inspire, strengthen, and give hope, at a time when we need those things more than ever. Plus…it would be nice to have rock represented on some level at the Super Bowl, and to prove to everyone that there are rock singers out there who can do the anthem as much justice as any pop artists out there, and even possibly take it higher."

The national anthem has never been performed by a rock singer at the Super Bowl. It was previously performed by Demi Lovato, Carrie Underwood and Billy Joel the last three times the game was played in Miami.

The national anthem performance is a pre-game tradition which has sparked a polarizing debate over recent football seasons.

In May 2018, the NFL mandated that all players must stand for the national anthem and if they didn't, teams could discipline them. However, ahead of the season, the NFL backed off the policy.

In recent months, TWISTED SISTER frontman Dee Snider has publicly complained that the rock genre has been excluded from the NFL's biggest event. "Week after week rock is the go-to music during games but gets no respect when it comes to the Super Bowl", Snider tweeted. He voiced his opinion after Jennifer Lopez and Shakira were announced as performers during this year's halftime show.

DISTURBED's latest album, "Evolution", was released in 2018 via Reprise.