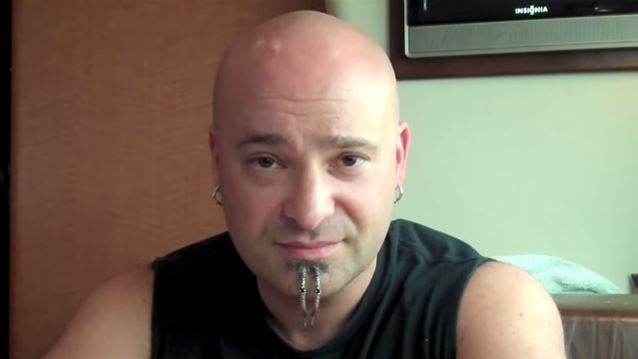 DISTURBED singer David Draiman has slammed newly named "The Daily Show" host Trevor Noah over the South African comedian's old tweets which show jokes he made at the expense of Jews.

Noah, who was born to a black South African mother and white Swiss father, has come under attack for remarks made on Twitter that some perceived as anti-Semitic and misogynist.

Among Noah's controversial tweets, which were posted between 2009 and 2014, was one in which he wrote: "Almost bumped a Jewish kid crossing the road. He didn't look b4 crossing but I still would hav felt so bad in my german car!" A 2012 post about an Argentine soccer player poked fun of Jewish women. Noah wrote: "Messi gets the ball and the real players try foul him, but Messi doesn't go down easy, just like jewish chicks." In another tweet, Noah said: "Behind every rap billionaire is a double as rich Jewish man." He also once retweeted a message from a follower that read, "Muslims don't hate Jews. Jews hate Muslims."

Some of Trevor's followers told him not to worry about it while others asked him to apologize. Trevor has since taken to Twitter to explain that to reduce his views to a few tweets is neither a reflection of his character nor his comedic evolution.

During an appearance on Israel's public domestic and international radio service Voice Of Israel, Draiman — who has extensive family in Israel, including his brother, Jerusalem-based folk rock and ambient musician Ben Draiman, as well as his grandmother — stated about Noah (hear audio below): "You know, I'd love to have this mamzer [a Hebrew word referring to a person born of certain forbidden relationships] go ahead and call me on to his show. If he wants to go ahead and be a funny guy, go ahead. Have me on your show. Go ahead and start spewing anti-Semitic or Jewish jokes while I'm on your show. Somebody's gonna end up in the hospital and somebody's gonna end up in jail, and I'll give you three guesses who that's going to be."

Asked how it could be that a public figure like Noah could "spout anti-Semitic rhetoric" to the world, Draiman responded: "I think that anti-Semitism has become fashionable. I think it's become acceptable in a lot of people's eyes."

He continued: "The media continues to spin the State of Israel and Jews as war-mongering, evil people, which we are not. I think that it's become something that, where people used to quickly rise to condemn it, they more and more are being very, very lackadaisical about it, and it's becoming something that isn't offensive to the mass public, which is very, very disturbing.

"I think that, back when I originally wrote my piece for the Gatestone Institute during the Gaza war, the last one, about why I support Israel, people criticized me for saying that the media was setting the stage for another Holocaust. Well, you know what?! Look around. Open your eyes. Look at what's happening throughout Europe. Look at what's happening in South Africa. Look at what's happening in South America. Look at the tremendous rise of anti-Semitism. And you know what?! It's all fueled by the way the media has portrayed this situation. It's all fueled by the way the media spins their story in their own anti-Israel, anti- Semitic way. And it continues to perpetuate. It's not stopping. And I don't understand why people aren't quick enough to condemn… I mean, to be honest, I don't even understand why organizations like the Anti-Defamation League aren't more on top of things like this."

Draiman also defended his right to use his celebrity as a platform to express his thoughts and opinions. He said: "It's the least I can do. I've been blessed with a platform and a voice, and I owe it to myself and my family and our people to use it responsibly."

He continued: "I try not to mix the politics as much with the band, per se, because my political views are my own; they're not necessarily the band's. Although they do support me and always have supported me, and I thank my brothers in DISTURBED for doing that. They've always been tremendously supportive, and, of course, protective of me, to be perfectly honest, which is kind of like the whole 'big brother' mentality, which is nice.'

Draiman added: "But DISTURBED… The music is time for an escape. When you have the media reflection in songs like 'Never Again' that directly reflect anti-Semitism, obviously, it's much more blatant, but that's kind of a rarity within the body of work, But if I can, instead of being some person that gets on social media to just self-promote, and to try and push his visibility for no other reason than to further illuminate himself, which is really not my desire or wish, and not something that I look for. I could act like a lot of other people do. But I choose to use it responsibly. I've been an activist since before I ever was a professional musician, and so I think that it'll never leave me. And if I have an extended reach to use, and if I have an amplified voice to be able to raise up, believe you and me, I'm going to raise it."

He went on to say: "It's scary times. You have to stand up. We're no longer a people that marches like sheep into the cattle cars off to the concentration camps. This is a different generation, this is a different mindset, and we are strong, we are steadfast. We are not gonna take it anymore. And I certainly won't. I have I don't know how many broken bones, over the course of my life, in my body that are directly from engaging anti-Semitism and fighting it. I remember every single one of them. And I'll continue to fight for it. I'm not afraid of being injured in the process of doing it either. It is what it is. There's a cost to preserving your soul. There's a cost to preserving your character and to trying to defend your people, and sometimes it's worth the cost. And I think it is.

"I think that my fan base has always viewed me as someone of integrity, somebody that stands up for what they believe in, and somebody who doesn't back down in the face of people like this. And I will continue to be that person — whether I remain a public person or whether I become someone that retreats into privacy. It's never going to change. I will always be a proud defender of the Jewish people and of the State of Israel."

According to Reuters, Noah made his mixed race a big part of his comedy. During his childhood under apartheid laws, blacks and whites were prohibited from living together.

"They had me, which was illegal, so I was born a crime," he said in one of his comedy routines.

The DISTURBED song "Never Again", from 2010's "Asylum" album, was written about the Holocaust and calls out people who deny it.