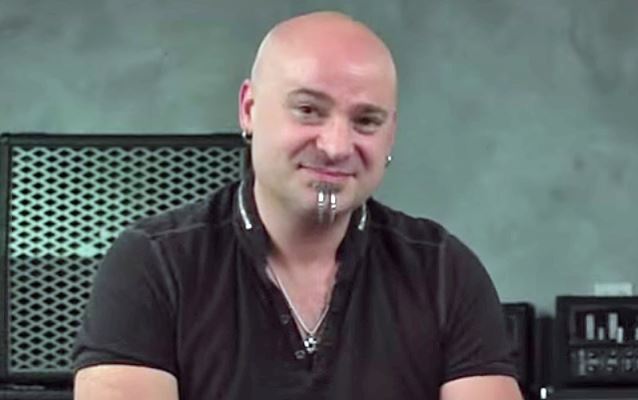 Chris Enriquez of Revolver magazine recently conducted an interview with DISTURBED singer David Draiman. You can now watch the chat below.

Speaking about the early stages of the songwriting process for DISTURBED's comeback album, "Immortalized", Draiman said: "I was busting my head on [guitarist Dan Donegan's rough song ideas] for the better part of a month and kind of was hitting a wall. Not that I wasn't coming up with ideas creatively, but I wasn't trusting them. I was being very, very… overly critical of my own stuff. I can be very helpful to other people, when it's someone else's work and I can look at it completely objectively, but when it's mine, it's really hard to remove myself from the equation. And I can come up with twenty ideas and not realize that three or four of them are really epic. And so I said to him, 'Let me come out to Chicago, and let's do this on the fly. Let's do this in person. Let me throw these ideas at you and Mike [Wengren, drums] as I'm thinking of them, and you guys will be my barometer. Just like we did in the beginning; that's kind of the key."

He continued: "You can't replace that chemistry that exists between us. It was so amazing to rediscover that. It was inspiring for all of us. Every time we got into a room, great stuff was coming out… [And] I'll tell you: we'll never do it any other way."

Draiman added :"After years and years of relying on technology and sending music files back and forth across the country — me in Austin, texas; Dan's still in Chicago, [and] Mike now lives outside of Milwaukee — it was nice to have it just be human and real and organic, and to have that instant reaction."

DISTURBED landed its fifth No. 1 album on The Billboard 200 chart with "Immortalized".

The new disc opened with 98,000 equivalent album units earned in the week ending August 27, according to Nielsen Music. Of that sum, 93,000 were pure album sales.

The only DISTURBED album to miss the top position was the band's debut, "The Sickness", which peaked at No. 29 in 2000.