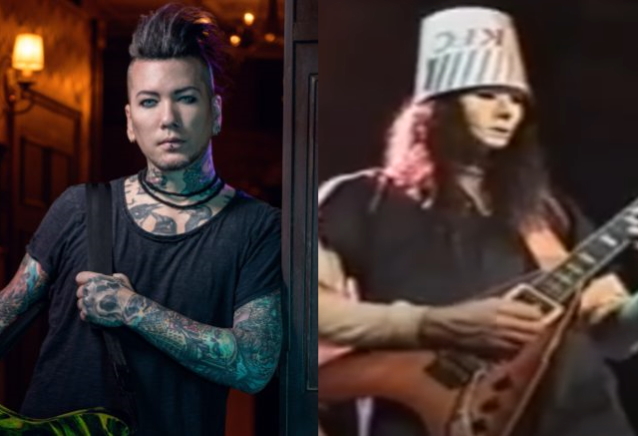 DJ ASHBA On BUCKETHEAD's Time With GUNS N' ROSES: 'That Wasn't The Reckless Rock And Roll Band That We All Grew Up On'

DJ Ashba has clarified his recent comments about Buckethead, saying that he wasn't trying to "discredit" the fellow ex-GUNS N' ROSES guitarist "at all."

This past January, Ashba, who joined GUNS N' ROSES in March 2009 following the departure of Robin Finck, spoke about his time with the Axl Rose-fronted outfit in an interview with Antihero Magazine. The guitarist said: "I didn't know what to expect. I was hoping that one day Slash would come back, and the reason I took the gig is that, honestly, I was — no disrespect to Buckethead [former GUNS N' ROSES guitarist Brian Carroll, who was in the band between 2000 and 2004] or anybody — but seeing a guy run around with a chicken bucket on his head, it's, like, to me, that took the coolness out of the band that I grew up loving, and that's one of the main reasons I wanted to get in there and try to do whatever I could do to get justice, bring back that reckless rock and roll vibe of what Slash was all about and GUNS N' ROSES was all about. To me, it was in a sense losing that thing that I loved about the band. And I love Buckethead as a guitarist. No disrespect at all — it's just, in my opinion, he didn't really fit the band."

Two months after BLABBERMOUTH.NET and other media outlets reported on Ashba's comments, he appeared on The SDR Show, where he was asked to elaborate on his apparent criticism of his predecessor.

"The media, they twist every headline," DJ said (as transcribed by BLABBERMOUTH.NET). "I didn't mean that in any bad way. Buckethead could play circles around me."

When host Ralph Sutton said that Buckethead is "a phenomenal guitarist" whose "look didn't go with GUNS N' ROSES," Ashba agreed, saying: "And that's all I was saying. No discrediting him at all. I just, as a fan, that just didn't… that wasn't rock and roll, the reckless rock and roll band that we all grew up on. So, you know, to me, it's, like, I just didn't feel like he personally fit. And that was just my opinion."

A year ago, GUNS N' ROSES guitarist Richard Fortus talked about what it was like to work with Buckethead for a couple of years in the early 2000s. The eccentric musician, who wears a fried-chicken bucket on his noggin and talks only through a hand puppet, quit GUNS N' ROSES in 2004 after becoming fed up with GUNS' inability to complete an album or tour, his manager told MTV at the time.

"Bucket is very musical, but I think a lot of guys like that — phenomenal, prodigious talent — they're not necessarily… I think Bucket's music is great," Fortus said. "What he does on his own, he's out there, but he did understand how to make three guitars work, and that's a very difficult thing. And he would lay out and just stand there and be weird and Bucket-y, and then he would come in on the choruses, and it would be huge. He got that; he understood that. [He's] a phenomenal talent. But the thing is, socially, guys like Bucket spend so much time in their bedroom practicing that they don't really — it's just different for them socially.

"Being in a band, you've gotta relate to people," Fortus continued. "And I think Bucket struggled with that. I always got along with him, but I think he really had a tough time with that."

Ashba recently launched a dance/rock hybrid called GDM (Guitar Dance Music) with his ASHBA project. His latest release is a single called "Bella Ciao", a modern-day EDM-driven makeover of the Italian folk classic. The song marked Ashba's first release of 2021 and followed a series of tracks that were released in late 2020 through Edgeout Records/UMG/UMe, including "Hypnotic", "Let's Dance" and "A Christmas Storm".