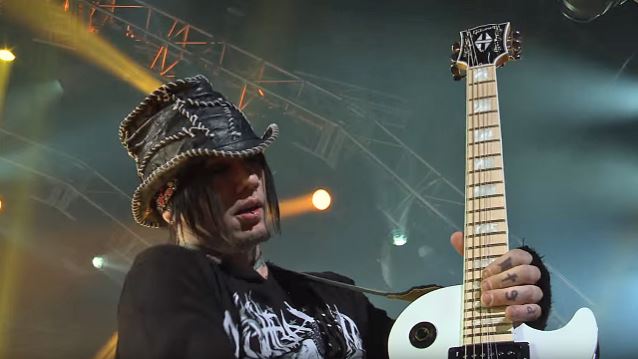 DJ ASHBA On GUNS N' ROSES Reunion: If SLASH Is Back, There's No Reason I Need To Be There

Willy Tyler of the Billings, Montana radio station 96.3 The Zone recently conducted an interview with former GUNS N' ROSES and current SIXX:A.M. guitarist DJ Ashba. You can now listen to the chat in the YouTube clip below. A couple of excerpts follow (transcribed by BLABBERMOUTH.NET).

Ashba: "I had a blast, man. I think over six years — I don't know; around six years — [I played] well over three hundred shows with them, and we had a lot of fun; there were a lot of laughs a lot of good times. It gets to a point where you kind of start losing yourself, or at least I do. I never got into the music business or started playing music for money, so at some point you kind of start going, 'Wait a second.' Playing other people's songs is really cool and it's fun, especially since you were very inspired growing up as a kid to these songs, but after a while you… I remember [SIXX:A.M.] did the 'Modern Vintage' tour — it was like nineteen shows — the difference between playing stuff that you write and the notes you hit that come from your heart, when you see them connect with the crowd, I can't tell you… No amount of money can buy that feeling. You know what I mean? So it just came down to following my heart and kind of just refocusing and getting myself back on track to where I knew I was supposed to be."

On having to emulate several different guitar players' styles while performing the GUNS N' ROSES songs on tour:

Ashba: "Yeah. Again, I'm happy I did it, because it was an experience of a lifetime. And it really did make me, I believe, a better guitar player. It was tough. I'm not great at playing other people's styles, and it really made me… You know, I was playing quite a few different people's styles. One song I'd be soloing to a Buckethead solo, the next one would be a Robin Finck solo, the next one would be Slash, and it was tough because they all three have such different styles from each other. And there's three guitar players in the band, which I wasn't used to, so you played five measures of a solo and then the next guy would take off and it was just really broken up and it was a very unnatural feeling to play this stuff. But at the same time, it was an incredible challenge, and I'm glad I did it, though."

On whether he has seen GUNS N' ROSES perform on the "Not In This Lifetime" tour yet:

Ashba: "I haven't. Actually, I can't wait. I'd love to see it. I remember before the whole thing went down, before it was [made] public, Axl [Rose, GUNS N' ROSES lead singer] personally called me and really wanted me to be a part of it, and my whole thing was, you know, if [Slash is] coming back, that's his deal, man. I couldn't be happier as a fan, 'cause I get the best of best worlds — I go play in the band I love and I get half of the band I used to love back, which is kind of a win-win. But if Slash is back there, there's no reason I need to be there. I was just there trying to keep the music alive. [Laughs]"

Ashba joined GUNS N' ROSES in March 2009 following the departure of Robin Finck and stayed in the band until July 2015.